Last night was an amazing star-studded exclusive VIP premiere of ICONS OF DARKNESSS (IOD) at The Montalbán Theatre in Hollywood at Hollywood & Vine. This is in partnership with, Famed Director, TV actor, writer, producer, and archivist Richard “Rich” Correll; and Gil Smith, President of The Montalbán.

“ICONS OF DARKNESS” is an Immersive Experience and Exhibition from The Largest Private Collection of Sci-Fi, Horror, and Fantasy Memorabilia, and is 18,000 Square feet of mazes, stairs, monsters, heroes and villains.

Rich Correll’s private collection of memorabilia is valued at more than $ 13 million, and is the largest private collection of memorabilia from iconic films. Hundreds of films will be represented, including Frankenstein, The Exorcist, Star Wars, Iron Man, Jurassic Park, Spiderman, Joker, Harry Potter, Lord of the Rings, Aliens, Batman, and Dracula etc. The massive dose of Hollywood madness showcases more than 100 years of cultural significance, with screen-used artifacts, life-like replicas, and never-before-seen Props.

Below photo: Grand opening VIP night at the Montalbán theatre in Hollywood for Icons of Darkness- now through November 1st. This was the first live on location event in Hollywood since the Coronavirus shutdown. We hope there will be more events like this very soon! Rich Correll did an amazing job putting together this collection of everyone in the history of Horror movies. Photo at entrance with Jack Nicholson and Alfred Hitchcock: 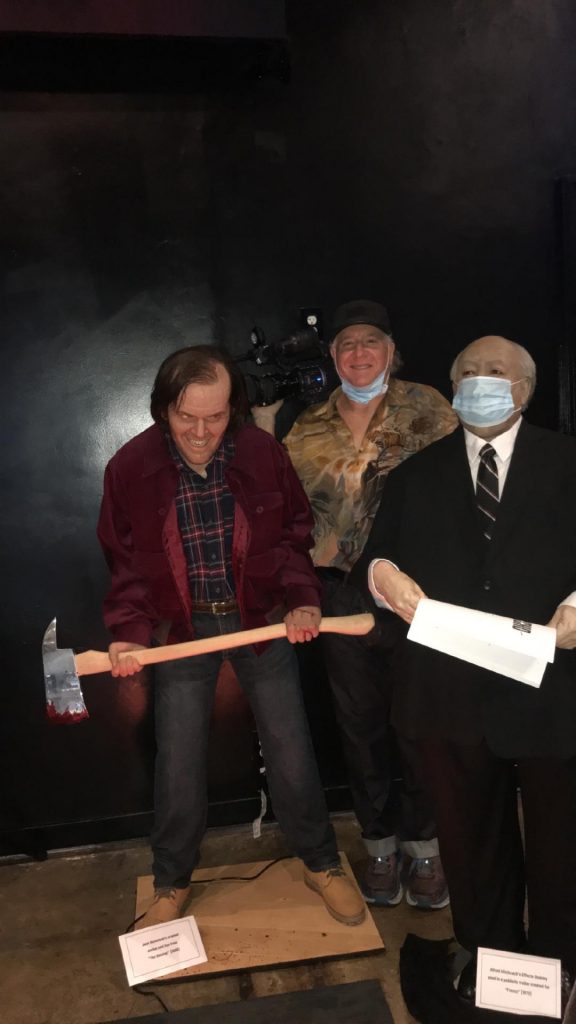 After a fun and fascinating tour of the exhibition, we went up on the roof of the Montalbán for the after party with a MONSTER MIDWAY allowing the celebrities and VIP guests to play a selection of carnival style games such as Zombie Brain Smash, Mausoleum Ring Toss and Skeleball for prizes.

Some of the celebrities that we interviewed were:

We want to give a special thanks to our reporters: Jaden Benenfeld & Trinity McCourt, and Steve Taylor, for doing a great job to show you all the monsters in the exhibition, taking you to the after-party with fun and games, and interviewing all the stars that were there for opening night.

Some of our fans of our TV show may remember Jaden when he was only about 7 years old- when he did some big events with us, and now is a full grown adult- and does an amazing job as a segment producer, on-air reporter, and editor for our 2 shows. There will be a lot more shows from Jaden and Trinity very soon! In fact tomorrow night Jaden & Trinity and our news team will cover The Urban Legends Drive-Thru Haunt at The OC Fair in Costa Mesa, with monsters that come right up to your car, and with 3 show areas.

This viewing experience and new exhibition is a COVID safe immersive public experience, and is COVID approved by California and LA Health Department regulations and requirements. For up-to-date details of this first public on location Hollywood Halloween event go to:  https://www.themontalban.com/icons-of…