Over this last weekend all the major Music Superstars came to Las Vegas to come out for the 2022 Billboard Music Awards, at The MGM Grand Hotel, at the Grand Garden Arena in Las Vegas, and the first-ever Billboard MusicCon, a 2-day music event at Area15 in Las Vegas, and the Lovers & Friends Festival to enjoy a healthy and refreshing JD’s Vegan ice cream with the creator and hip-hop legend himself, Jermaine Dupri, in the hot Las Vegas sun!

This major music awards show event: the Billboard Music Awards- was Hosted by Sean “Diddy” Combs. In the below photo Diddy on the left poses with his son Christian “King” Combs, and in the photo below that are Diddy’s 3 daughters: Jessie James Combs, Chance Combs and D’Lila Combs, who were all there to give their father support: 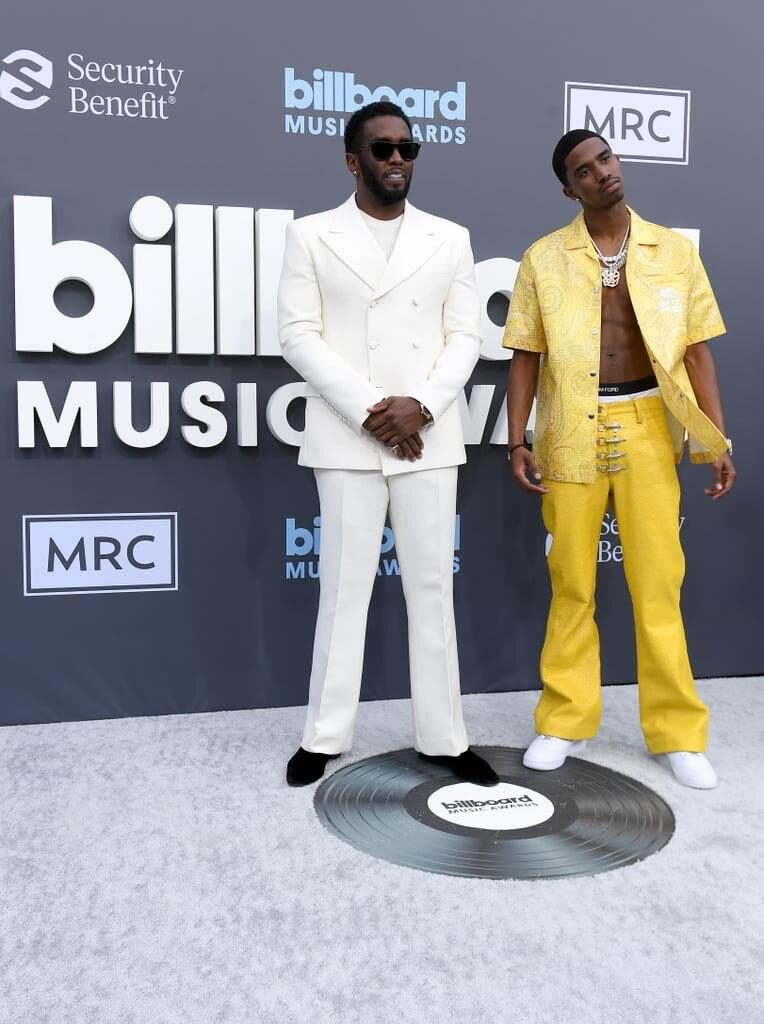 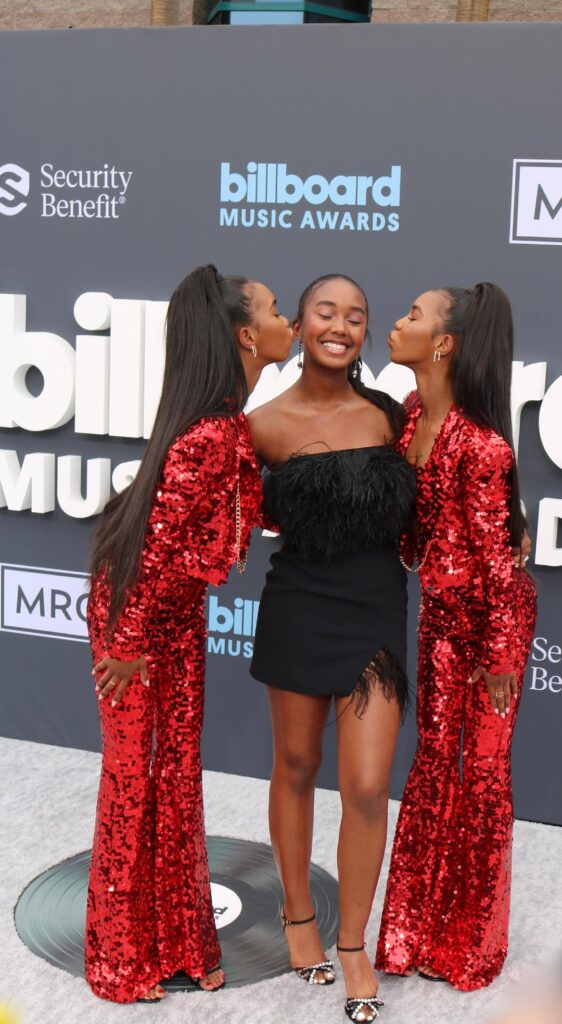 Diddy said that he intended to focus this year’s awards on the theme of “love and forgiveness.” “As a musical family, none of us are saints; none of us are without things that happen to them in life,” he said. “So, one of the things I’m doing directly is uncanceling the canceled. That’s breaking news because people haven’t been about uncanceling. But canceling is a trend that needs to stop.” This show aired live on NBC and was also available for streaming on Peacock. 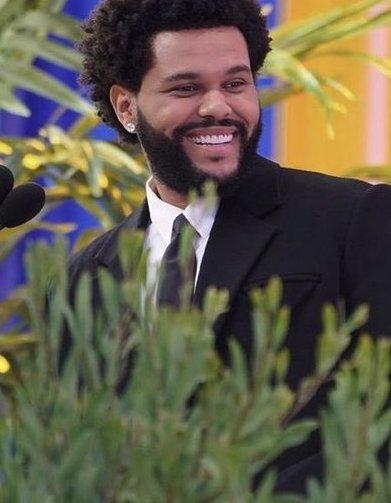 There were 62 categories, with the The Weeknd for a second consecutive year- received the most nominations of any artist, with 17, and winning the Top Artist Award. The win was the Weeknd’s impressive 20th total victory out of 64 total nominations at this year’s ceremonies, following wins for top male artist, top Hot 100 artist, top Radio Songs artist, top R&B artist, top R&B male artist, top R&B album (for After Hours), top Hot 100 song, top radio song and top R&B song (all for “Blinding Lights”).  Abel Makkonen Tesfaye (born February 16, 1990), known professionally as the Weeknd, is a Canadian singer-songwriter and record producer, known for his sonic versatility and dark lyricism, his music explores escapism, romance, and melancholia, and is often inspired by personal experiences. He has received numerous accolades, including four Grammy Awards, 20 Billboard Music Awards, 17 Juno Awards, six American Music Awards, two MTV Video Music Awards, and nominations for an Academy Award, a Latin Grammy Award, and a Primetime Emmy Award. 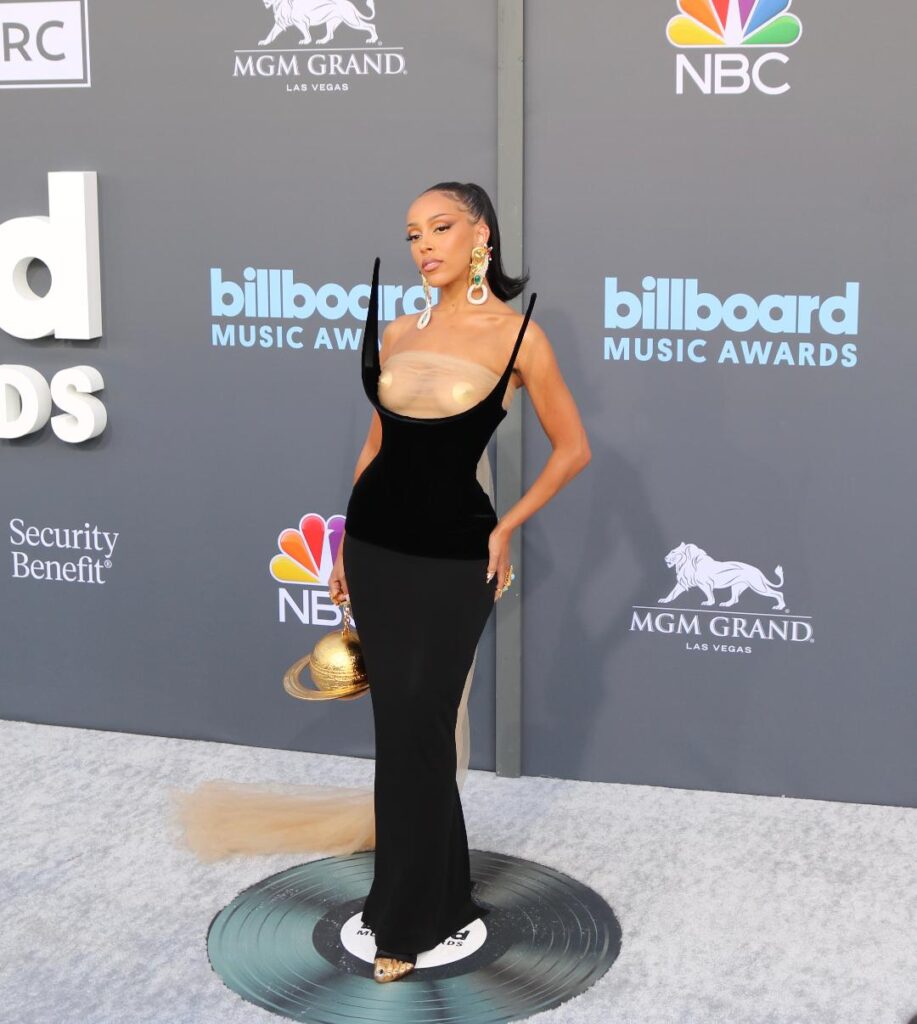 Doja Cat (See Photo above from the “red” carpet arrivals) was the most-nominated female act with 14 and won 4 awards; and BTS was the most-nominated group with 7 and winning 3; therefore, becoming the most-awarded group in BBMA history with 12 wins overall, breaking a 17-year record previously held by Destiny’s Child! Taylor Swift received a record-extending eighth nomination in the Top Artist category. Olivia Rodrigo won 7 awards, nominated alongside Swift in the aforementioned, and won for Top New Artist, making her the third consecutive artist in BBMA history—following Billie Eilish in 2020 and Pop Smoke in 2021—to be simultaneously nominated in both categories in the same year, and was the most-awarded artist at the show! Drake won five awards, including Top Artist, and extended his record as the most-awarded artist in BBMA history, with 34 wins overall. Justin Bieber became the first artist to win the Billboard Music Award for Top Hot 100 Song for a second time since the category’s inception in 1990. Mary J. Blige was honored with the 10th Billboard Icon Award. 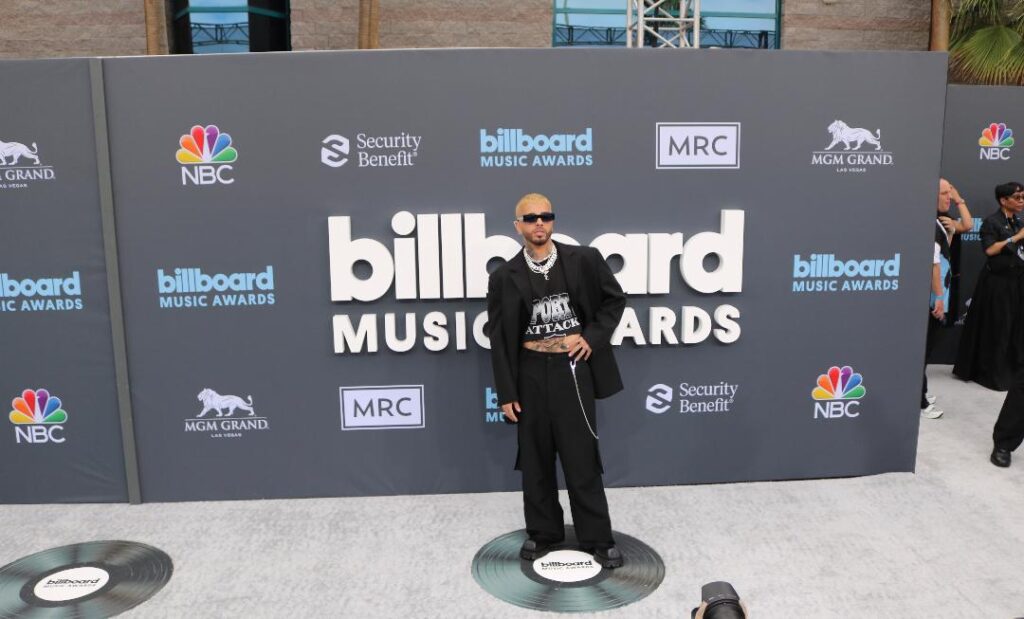 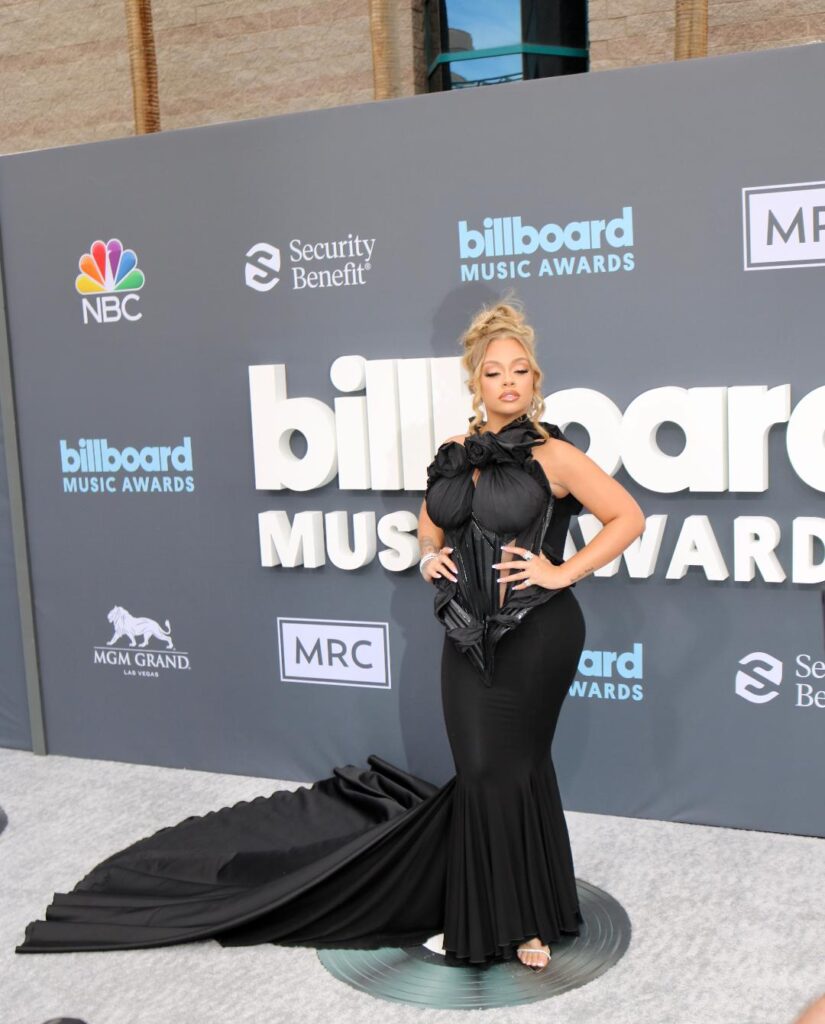 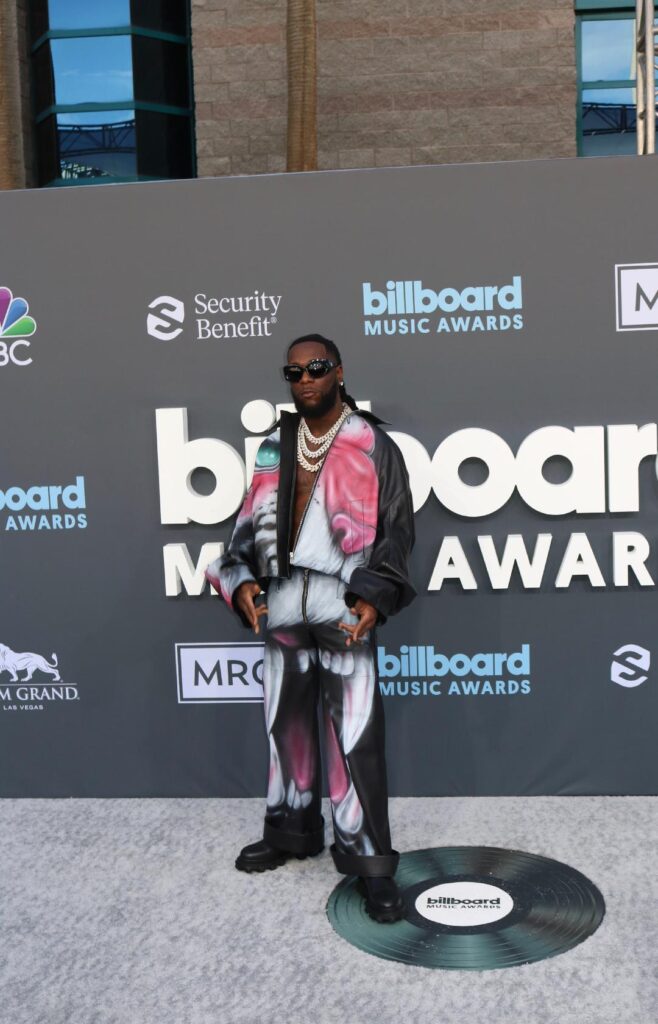 Silk Sonic, Florence and the Machine, Maxwell—were given a “special tribute performance to a pop icon”—and Morgan Wallen: 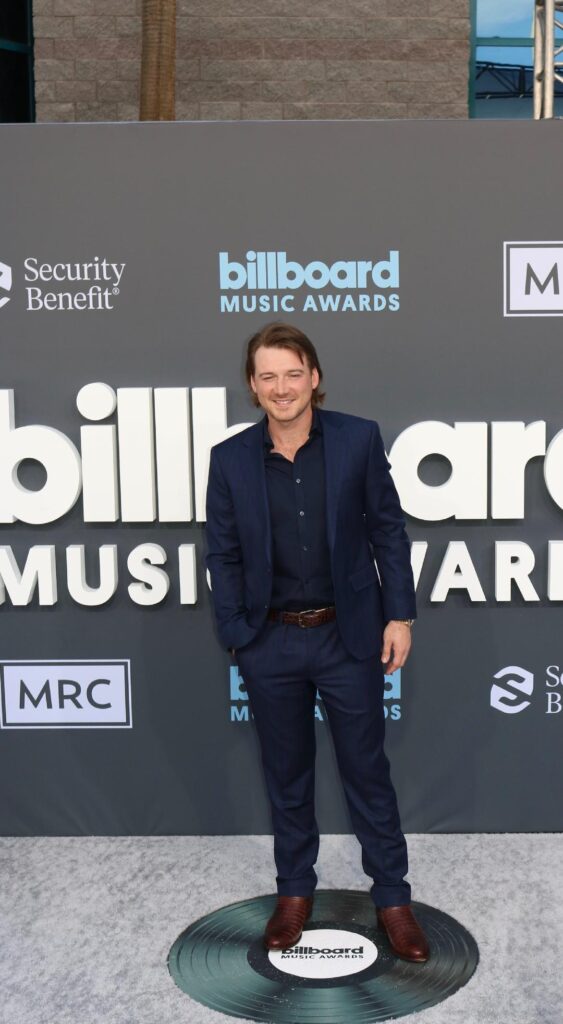 Ed Sheeran(performed live from Belfast in Northern Ireland.), and Becky G blowing a kiss to the press on the red carpet: 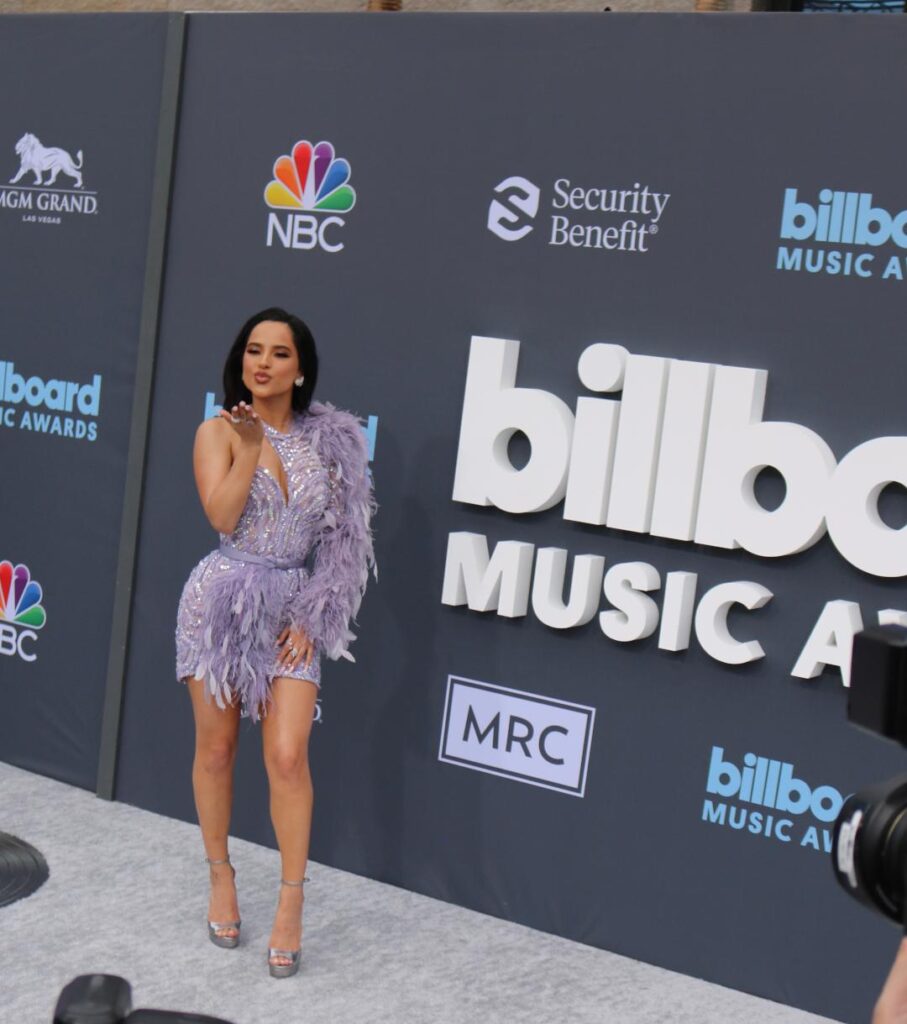 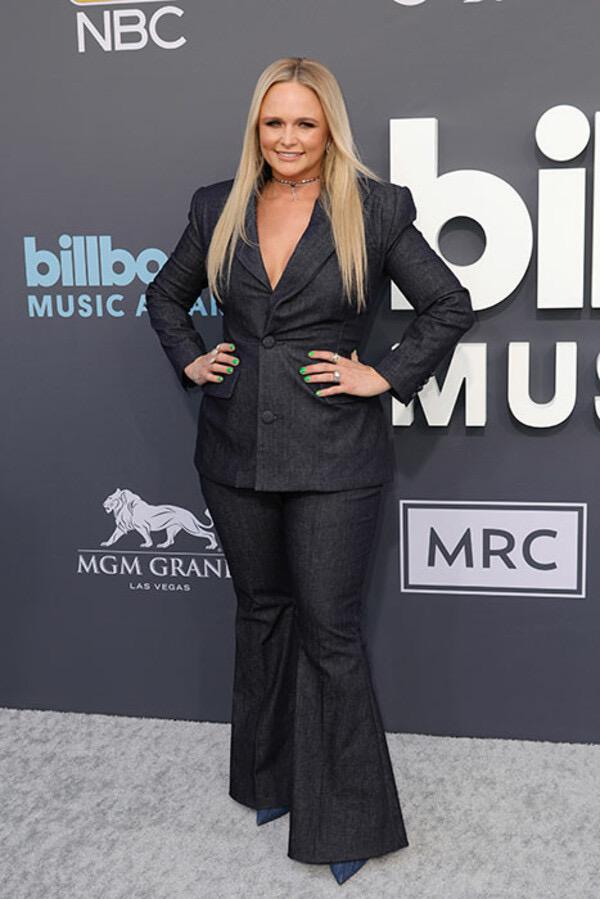 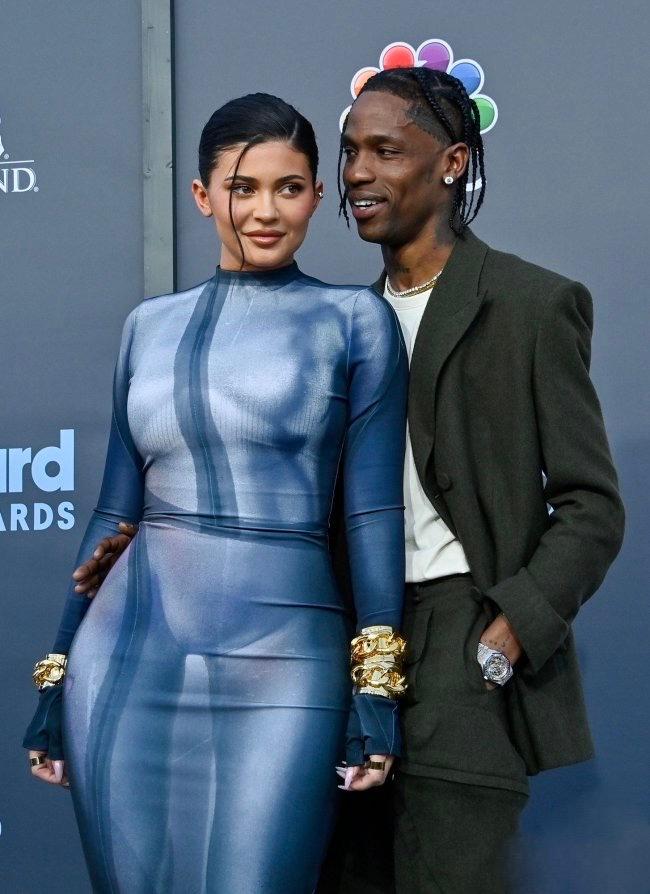 The Tennessee native: Megan Fox, and “Rap Devil” singer: Machine Gun Kelly met on the set of Midnight in the Switchgrass in March 2020. At the time, Fox was married to Brian Austin Green. Two months later, the costars were spotted together amid rumors of a split between the Transformers star (Megan) and Beverly Hills, 90210 alum (Brian). Green confirmed that he and Fox had called it quits after 10 years of marriage on his “…With Brian Austin Green” podcast on May 18, 2020. The below photo is of the famous couple arriving at the 2022 Billboard Music Awards: 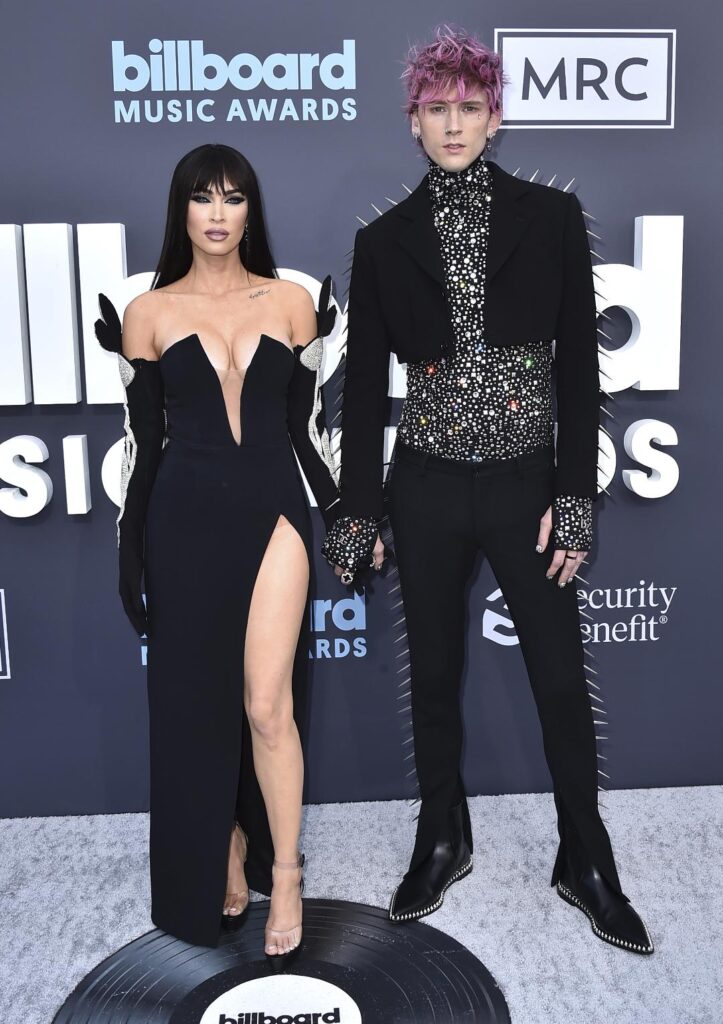 Dan + Shay is an American country pop music duo composed of vocalists and songwriters Dan Smyers and Shay Mooney. They are signed to Warner Records Nashville and have released four albums, Where It All Began, Obsessed, Dan + Shay, and Good Things. Of their nine singles; five have topped the Country Airplay chart and two have topped the Hot Country Songs chart. In addition to their own material, the group’s members have collaborated with Justin Bieber, Rascal Flatts, Lindsey Stirling, RaeLynn, and Kelly Clarkson. From 2019 to 2021, the duo won three consecutive Grammy Awards for Best Country Duo/Group Performance for the songs “Tequila”, “Speechless”, and “10,000 Hours”, and in 2019- which was the last time they had the Billboard Music Awards, before it was cancelled due to the COVID-19 shutdown in March of 2020, Day + Shay won the Billboard Music Awards Top Country Duo/Group Award: 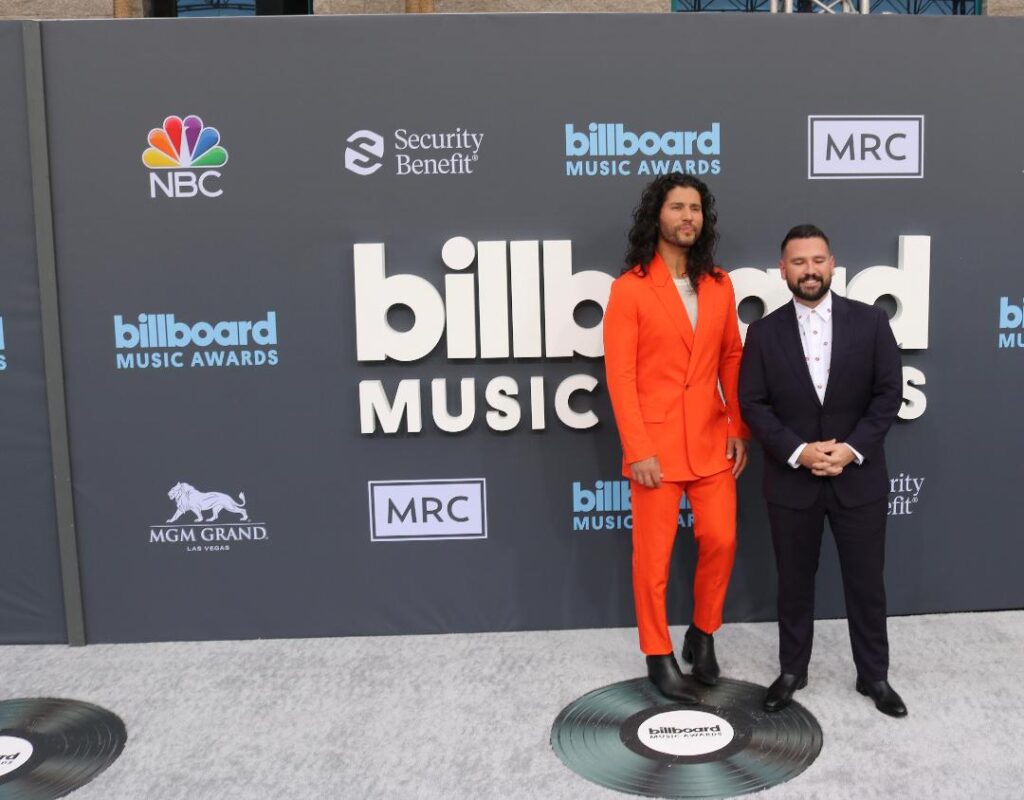 These above music Superstars gave some great performances at the 2022 Billboard Music Awards!

Silk Sonic, Becky G, and Kelly made their BBMA performance debuts at the show. For Wallen, it was his first award show performance since being banned from attending and performing at various ceremonies in early 2021 after his racial slur controversy, while for Scott it was only his second live performance since the Astroworld Festival crowd crush in November 2021.

The UK rock band and two-time finalists Glass Animals performed their hit “Heat Waves.” and took home their first wins at the 2022 Billboard Music Awards, including Top Rock Artist and the brand-new “PepsiⓇ Mic Drop Moment” for the “Longest Run To #1 On Billboard Hot 100” for “Heat Waves”’ record-breaking run to #1 after 59 weeks on the Hot 100 Chart: 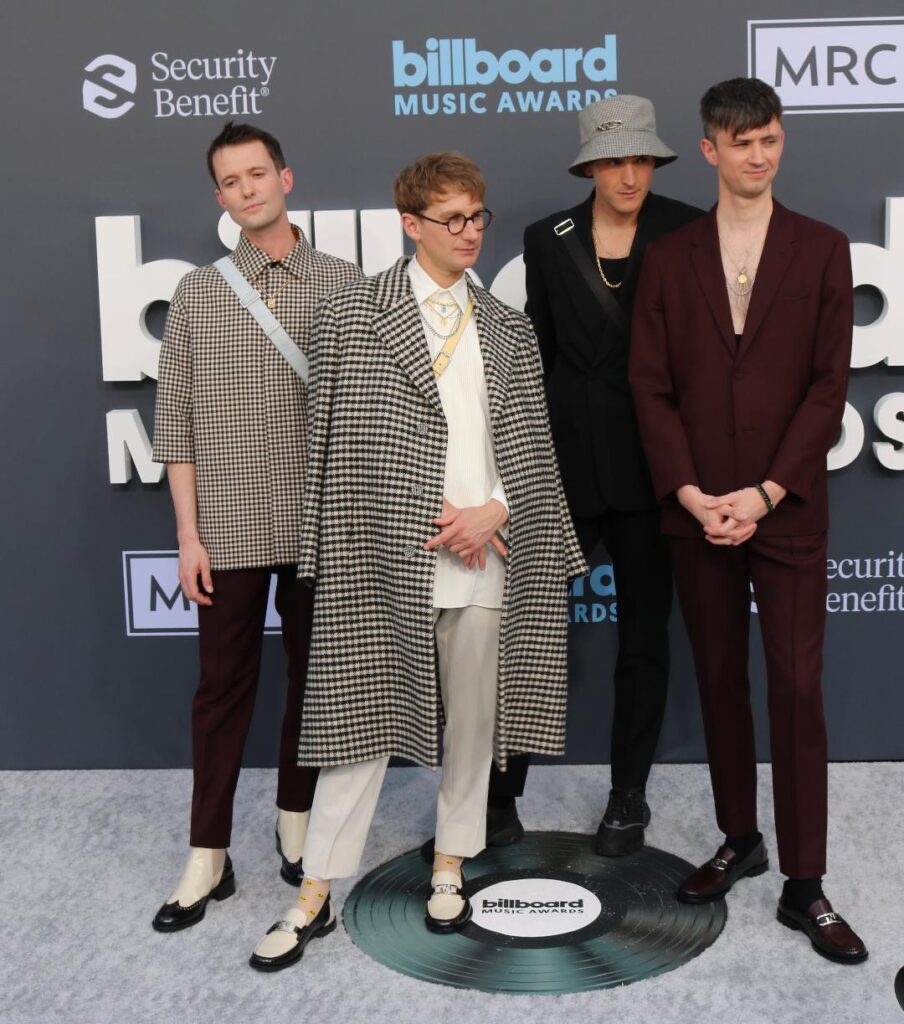 and wife Luisana Lopilato were positively beaming on the Billboard Music Awards red carpet. The married couple, who are expecting their fourth child, dazzled at the star-studded awards ceremony on Sunday, where Michael was doing the honors of presenting. It was hard to miss Luisana as she shone bright in a glamorous midnight blue sequin mini dress with a feathered hem that hugged her growing baby bump. “Haven’t Met You Yet” singer Michael looked like the cat that got the cream and couldn’t wipe the smile from his face as he stood behind Luisana while cradling her baby bump, and looking dapper in a navy suit: 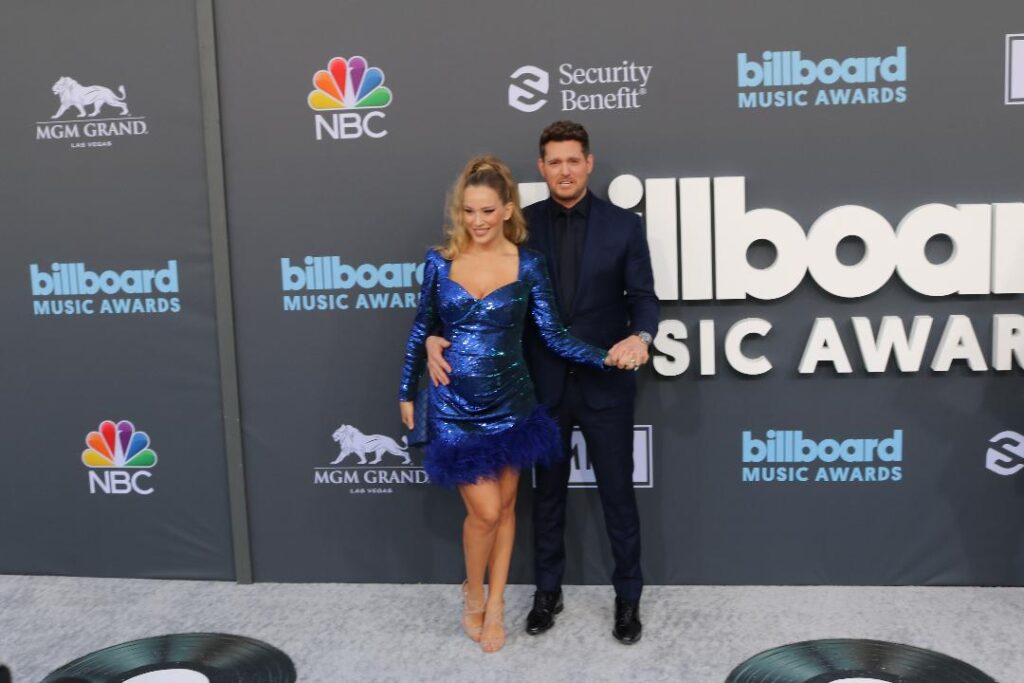 Taylor Swift received a record-extending eighth nomination in the Top Artist category. Olivia Rodrigo, nominated alongside Swift in the aforementioned, also earned a nomination for Top New Artist, making her the third consecutive artist in BBMA history—following Billie Eilish in 2020 and Pop Smoke in 2021—to be simultaneously nominated in both categories in the same year. 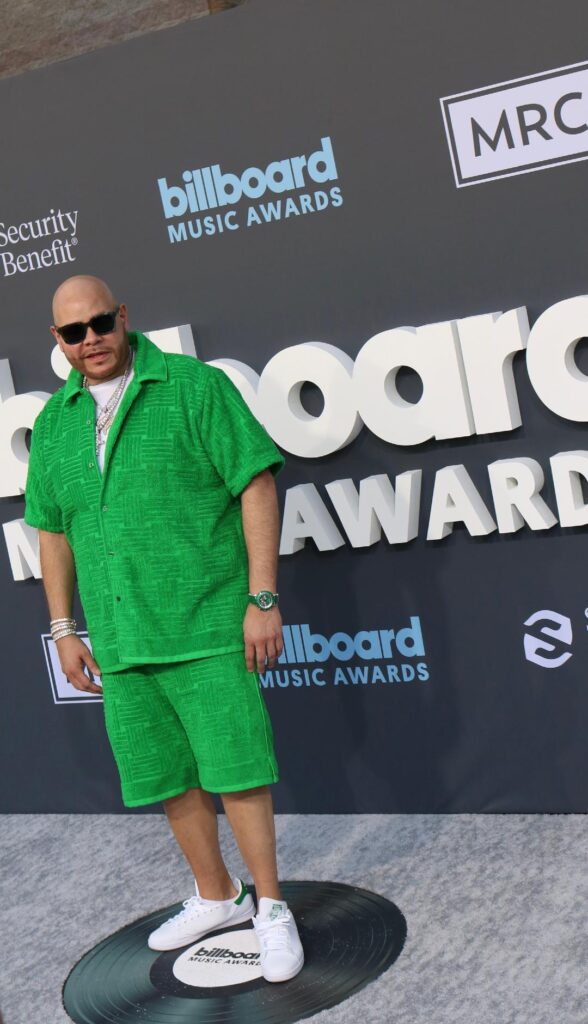 Winners for 54 non-televised awards were announced in a TikTok livestream on the red carpet, hosted by Tetris Kelly and Tiffany Taylor prior to the start of the show. The rest were revealed during the live television broadcast. Rodrigo won seven awards and was the most-awarded artist at the show. Drake won five awards, including Top Artist, taking his total wins to 34 overall and extending his record as the most-decorated artist in BBMA history. BTS won the most awards of any duo or group at the show, winning three of their seven nominations, including their third Top Duo/Group award which tied them with One Direction for the most wins in that category. They also became the most-awarded group in BBMA history—12 wins overall—breaking a 17-year record previously held by Destiny’s Child with 11 wins. Bieber won his second award for Top Hot 100 Song, with “Stay”, and became the only artist to win the award twice since it was first presented in 1990. Blige was honored with the 10th Billboard Icon Award, while youth activist Mari Copeny (Little Miss Flint) received the third Change Maker Award in honor of her environmental advocacy efforts for Flint, Michigan.

The awards were preceded by the first-ever Billboard MusicCon, a 2-day music event sponsored by Smirnoff and held 2 days before the 2022 Billboard Music Awards  at Area15 in Las Vegas. Participants comprised both artists and executives, and included industry managers like Dina Sahim: Swedish House Mafia, and French Montana the Moroccan-American rapper: 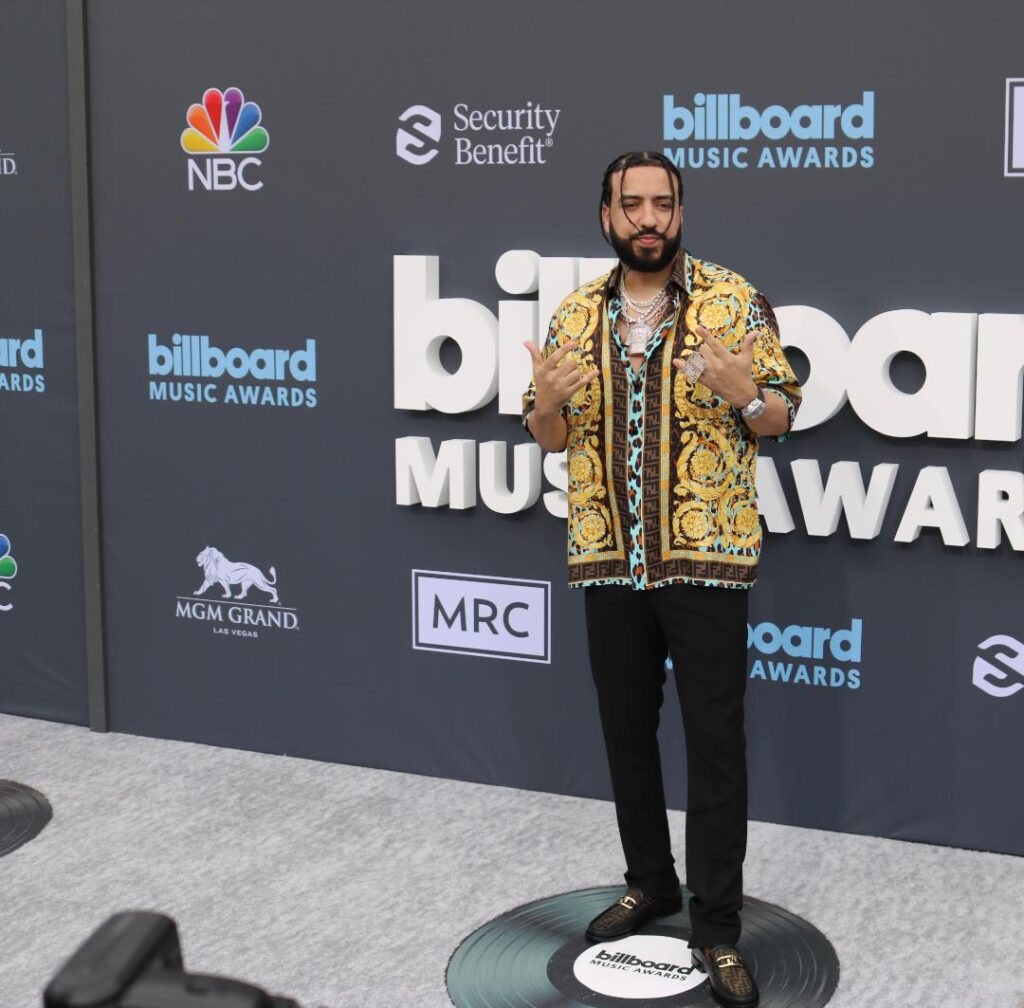 I had so much fun working on the light blue carpet at The 2022 Billboard Awards! It feels good to be back working red carpet events after two long years of no events! We all missed each other, and P Diddy said to us that we work too hard, and promised to give everyone a bottle of Tequila in the press room, and he came to the press room back stage with cases of DeLeon Tequila – his new company, and gave us all one bottle and we all went to Machine Gun Kelly’s after party and it was Crazy Fun! I loved seeing all my friends again! 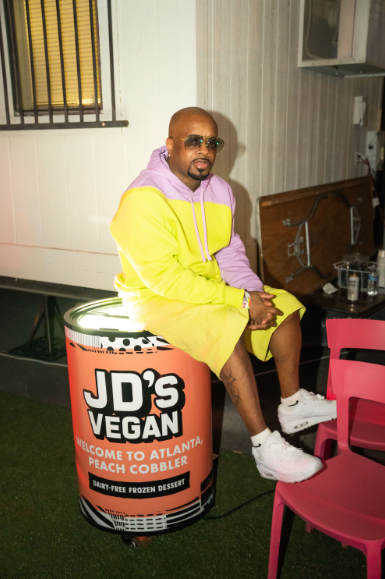 During this same weekend of the 2022 Billboard Music Awards, Music Superstars: Travis Scott, Usher, Miguel, were all in town for the 2022 Billboard Music Awards at The MGM Grand Garden Arena in Las Vegas, and stopped by for the Lovers & Friends Festival to enjoy a healthy and refreshing JD’s Vegan ice cream with the creator and hip-hop legend himself, Jermaine Dupri (see photo on left) in the hot Las Vegas sun.

The festival was complete with iconic headliners, surprise performances, special guest A-Listers, and delicious frozen treats from JD’s Vegan to help the crowd cool off and enjoy the show. This festival’s lineup was almost too good to be true with the top names in hip-hop and R&B taking the stage. Jermaine Dupri was in attendance and did a surprise performance with Ludacris. After shaking the crowd up, the dynamic duo went backstage to cool down and celebrate their performance with some refreshing ice cream from JD’s Vegan. Travis Scott and Jermaine Dupri Backstage: 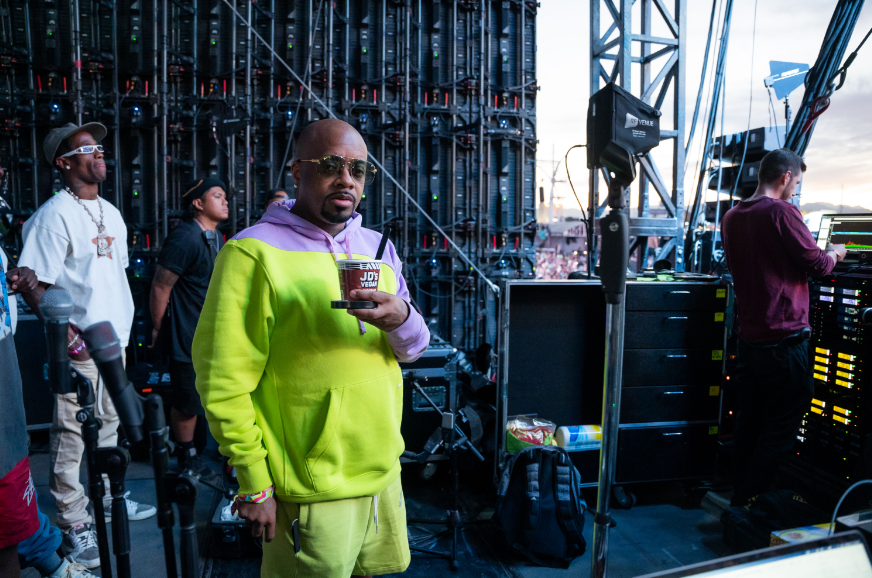 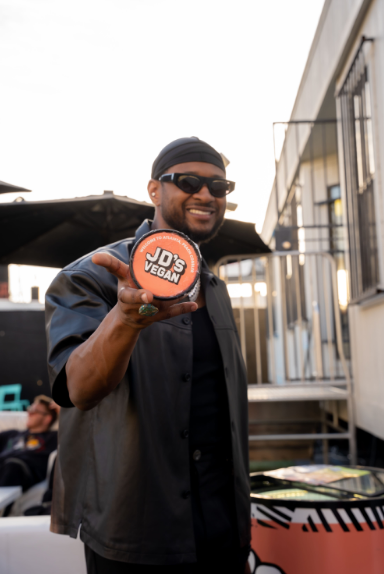 In between performances, the backstage area was decked out with a JD’s Vegan table for all the performers, A-List guests, and festival-goers to enjoy. Jermaine Dupri chatted with Usher about the flavor from his ice cream line that was named after their hit-song together, My Way. Usher could not seem to pick a favorite flavor and was excited to try them all! Nothing hits better than a delicious ice cream on a hot day in Vegas. 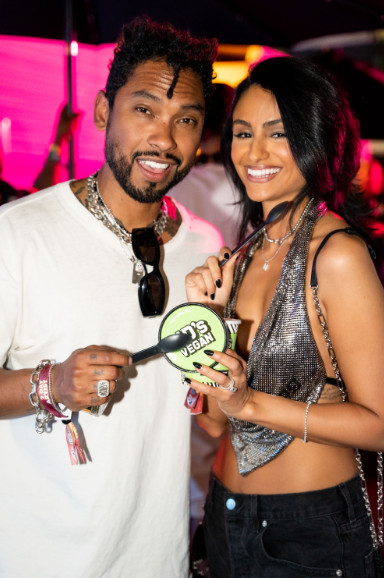