NFL Football Hall of Fame Legend, & 3 time Superbowl Champion, San Francisco 49ers’ Jerry Rice-  Dances with Entertainment & Sports Today’s TV show host Margie Rey at The Sports Spectacular Dinner Gala Show, at The Century Plaza Hotel. This gala event has paid tribute to many of the greatest sports legends. Jerry Rice who was one of the best Wide Receivers in The history of The NFL for The San Francisco 49ers , was on the hit TV show “Dancing With The Stars” , and soon became a very good Dancer , and almost won the whole season. During our interview with him, he gave Margie some tips on dancing , and then actually danced a little bit with Margie – that you can see in this show segment. Jerry also talks about playing under Bill Walsh and with QB. great Joe Montana, his NFL records, and being on “Dancing with The Stars” 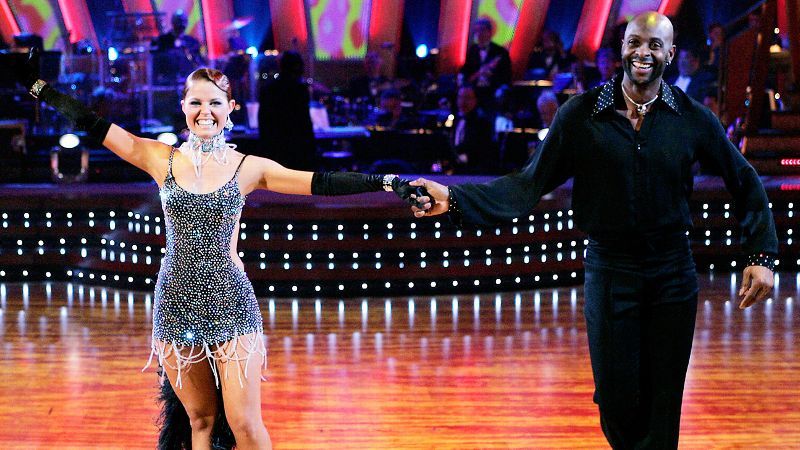 The Three-time Super Bowl champion and Hall of Famer Jerry Rice was the first athlete to participate on the show. Paired with Anna Trebunskaya, Rice became a surprise contender in a field of several celebrities with extensive dancing experience. The duo was just one of two pairs to never place in the bottom two during the season. Rice became an overwhelming fan favorite, but his advancement to the final caused some controversy because his scores from the judges were not as high as those received by some of his competitors. He ended up finishing in second place, behind former 98 Degrees singer Drew Lachey in Season Two. Jerry Lee Rice (born October 13, 1962) is a former American football wide receiver who played 20 seasons in the National Football League (NFL), primarily with the San Francisco 49ers. He is widely considered the greatest wide receiver in NFL history, as well as the greatest NFL player of all time. The above autographed photo shows the greatest Quarterback to wide receiver combo in NFL history : QB – Joe Montana to Jerry Rice . Many a TD game winning pass happened for The 49ers when these two legends were on the same field !

Our news staff was very lucky to be at Candlestick Park in San Francisco, on September 5, 1994, to cover the 49ers Vs. LA Raiders Monday Night Football game , (over 2 decades ago !), when Jerry Rice broke Jim Brown’s long standing record for TD receptions of 126.

With all the subtlety of Babe Ruth’s called shot, Rice and quarterback Steve Young gave the 68,032 fans — and a national television audience — what they came for: a touchdown pass to Rice for career touchdown No. 127. That broke the record established by Jim Brown, the Cleveland Browns running back, nearly 30 years earlier.

Now : The NFL’s career touchdown leaders as they stand today :

In the below photo from that game: The 49ers Jerry Rice catches a touchdown pass over L.A. Raiders defender Albert Lewis in the fourth quarter of their game: 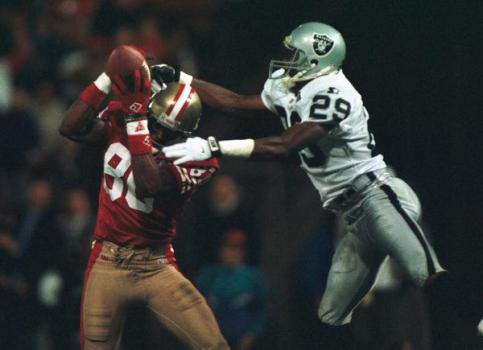