The Indy 500 Championship Race Coverage TV Special , and updated 2017 news story , is by sports & racing reporter, and TV Show Host Richard Marcella who as been covering every Indy 500 Championship for over 25 years ! Richard has worked as a TV show host, news reporter, and camera & film tech person, for over 20 years for Entertainment & Sports Today !

The Indianapolis 500 is an automobile race held annually at Indianapolis Motor Speedway in Speedway, Indiana, an enclave suburb of Indianapolis, Indiana. The event is held over Memorial Day (originally Decoration Day) weekend, which is typically the last weekend in May. It is contested as part of the Verizon IndyCar Series, the top level of American Championship Car racing, an open-wheel formula colloquially known as “Indy Car Racing”. The name of the race is often shortened to Indy 500.

The event, billed as The Greatest Spectacle in Racing, is considered part of the Triple Crown of Motorsport, which comprises three of the most prestigious motorsports events in the world, also including the Monaco Grand Prix, and the 24 Hours of Le Mans. The official attendance is not disclosed by Speedway management, but the permanent seating capacity is upwards of 250,000, and infield patrons raise the race-day attendance to approximately 300,000.[1]

The Mercedes-Benz W154 entered by Don Lee at the 1947 Indianapolis 500 with Duke Nalon as driver : 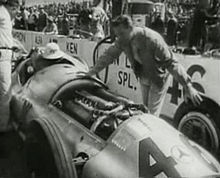 The inaugural running was won by Ray Harroun in 1911. The race celebrated its 100th anniversary in 2011, and the 100th running was held in 2016. Alexander Rossi is the defending champion. The most successful drivers are A. J. Foyt, Al Unser, and Rick Mears, each of whom have won the race four times. The active driver with the most victories is Hélio Castroneves, with three. Rick Mears holds the record for most career pole positions with six. The most successful car owner is Roger Penske, owner of Team Penske, which has 16 total wins and 17 poles.

The Indianapolis 500 is held annually at the Indianapolis Motor Speedway, a 2.5 mile oval circuit. Drivers race 200 laps, counterclockwise around the circuit, for a distance of 500 miles. Since its inception in 1911, the race has always been scheduled on or around Memorial Day. Since 1974, the race has been scheduled for the Sunday of Memorial Day weekend. Practice and time trials are held in the two weeks leading up to the race.

Traditionally, the field consists of 33 starters, aligned in a starting grid of eleven rows of three cars apiece. The event is contested by “Indy cars”, a formula of professional-level, single-seat, open cockpit, open-wheel, purpose-built race cars. As of 2015, all entrants utilize 2.2 L V6, twin-turbocharged engines, tuned to produce a range of 550–700 horsepower (410–520 kW). Chevrolet and Honda are the current engine manufacturers involved in the sport. Firestone, which has a deep history in the sport, dating back to the first 500, is the exclusive tire provider.

The race is the most prestigious event of the IndyCar calendar, and one of the oldest and most important automobile races. It has been avouched to be the largest single-day sporting event in the entire world. Likewise, the Indianapolis Motor Speedway itself is regarded as the world’s largest sporting facility in terms of capacity. The total purse exceeded $13 million in 2011, with over $2.5 million awarded to the winner, making it one of the richest cash prize funds in sports.

Due to safety issues, the race is not held in wet conditions. In the event of a rain delay, the race will be postponed until rain showers cease, and the track is sufficiently dried. If rain falls during the race, officials can end the race and declare the results official if more than half of the scheduled distance (i.e., 101 laps) has been completed.