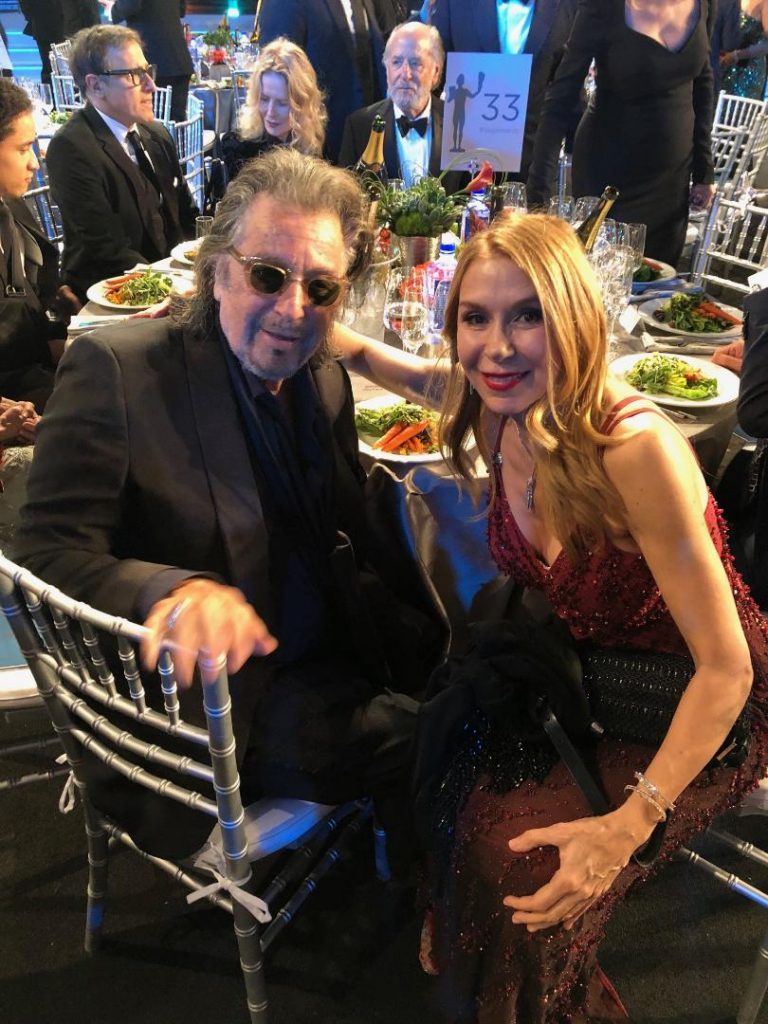 At the same table was another amazing icon- the wonderfully creative Robert De Niro whom I had worked with on “Goodfellas” and who was also part of the “Irishman”cast.  I congratulated him on his receiving the SAG “Lifetime Achievement Award” this year, for his work on screen and humanitarian accomplishments, which he so richly deserved! Don’t forget he also started the Tribeca Film Festival, has been giving us amazing performances year after year and is so dedicated to the arts: 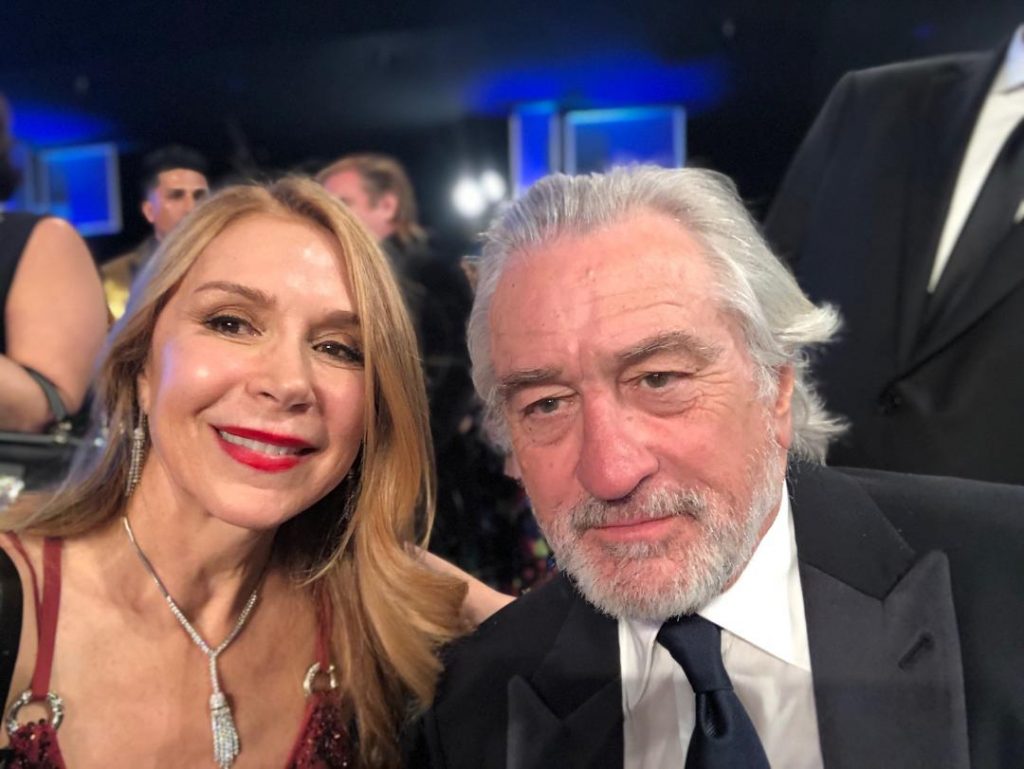 Entertainment Today’s TV Reporter: Jacqueline Murphy with actor Bobby Cannavale who is in the “Irishman” and nominated with the rest of the cast for outstanding performance by a cast in a motion picture.  A very interesting coincidence is that Bobby starred in the hit TV series (2012 to 2013) called “Nurse Jackie” – the same exact name we use for Jacqueline- since she was a registered Nurse (RN) in real life, and has wrote medical stories on the Coronavirus for our show on Entertainment Today and Entertainment & Sports Today: 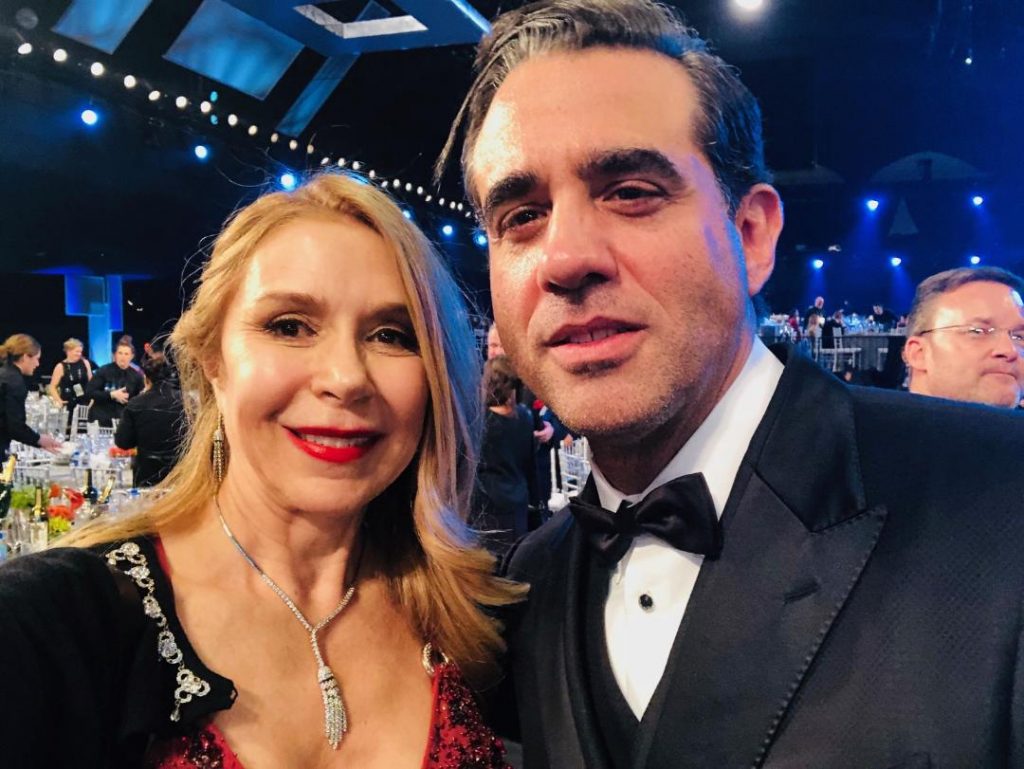 Also in the house was Quentin Tarantino– Producer/Director/Writer of the film “Once Upon a Time in Hollywood” which was nominated for best cast in a motion picture, and Leonardo DiCaprio was nominated for outstanding performance by a male actor in the lead role, and Brad Pitt the best supporting actor nominee in the same film- who won later in the evening and made a very funny speech. Below Jacqueline & Quentin: 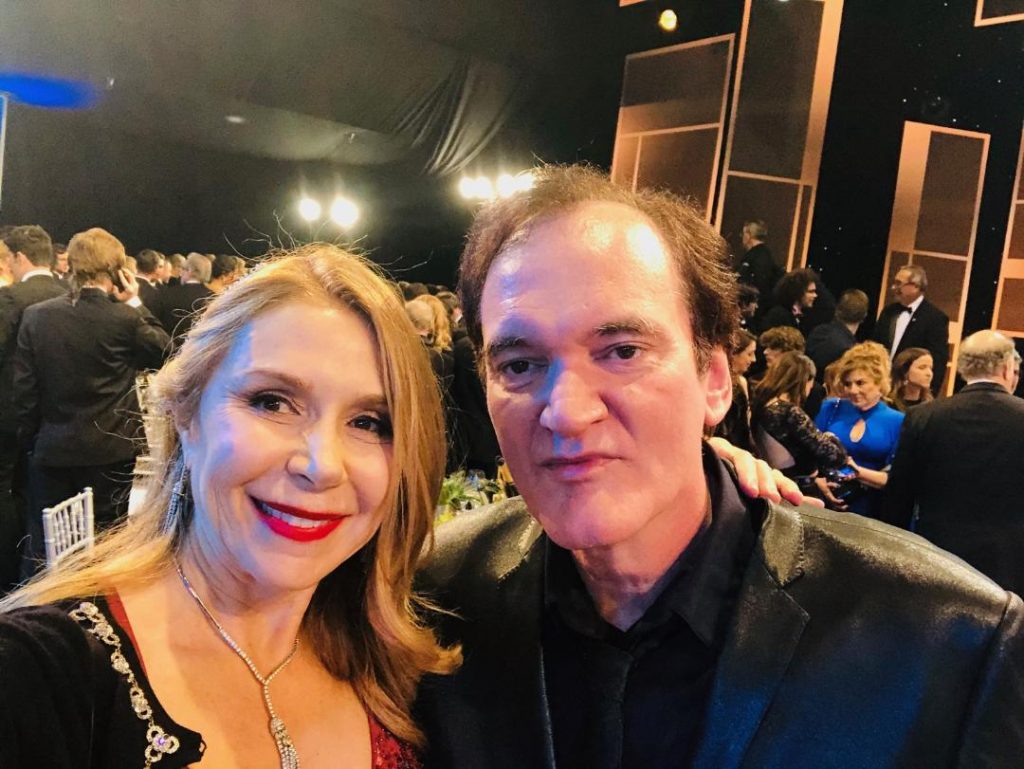 A great evening to remember and always fun to say hello to Producer & Director-Jay Roach-whose Cast from “Bombshell” was nominated for outstanding performance by a cast in a motion picture : 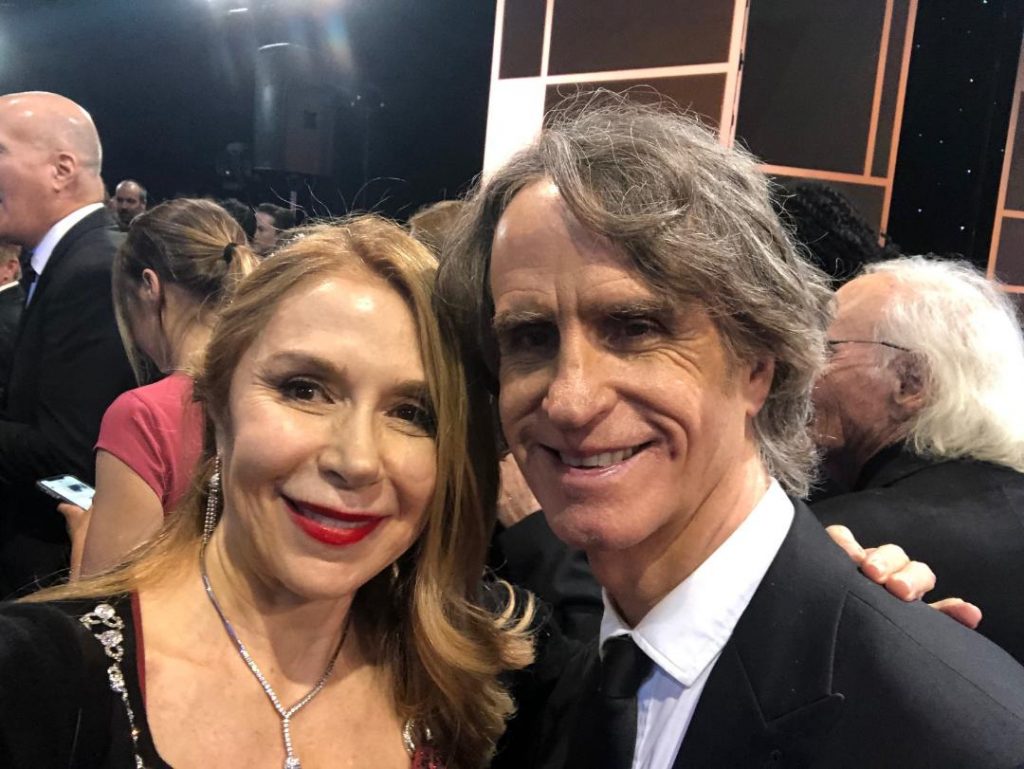 Star Reese Witherspoon with the cast of HBO’s “Big Little Lies” were also nominated for outstanding performance by an Ensemble Cast in a drama TV series: 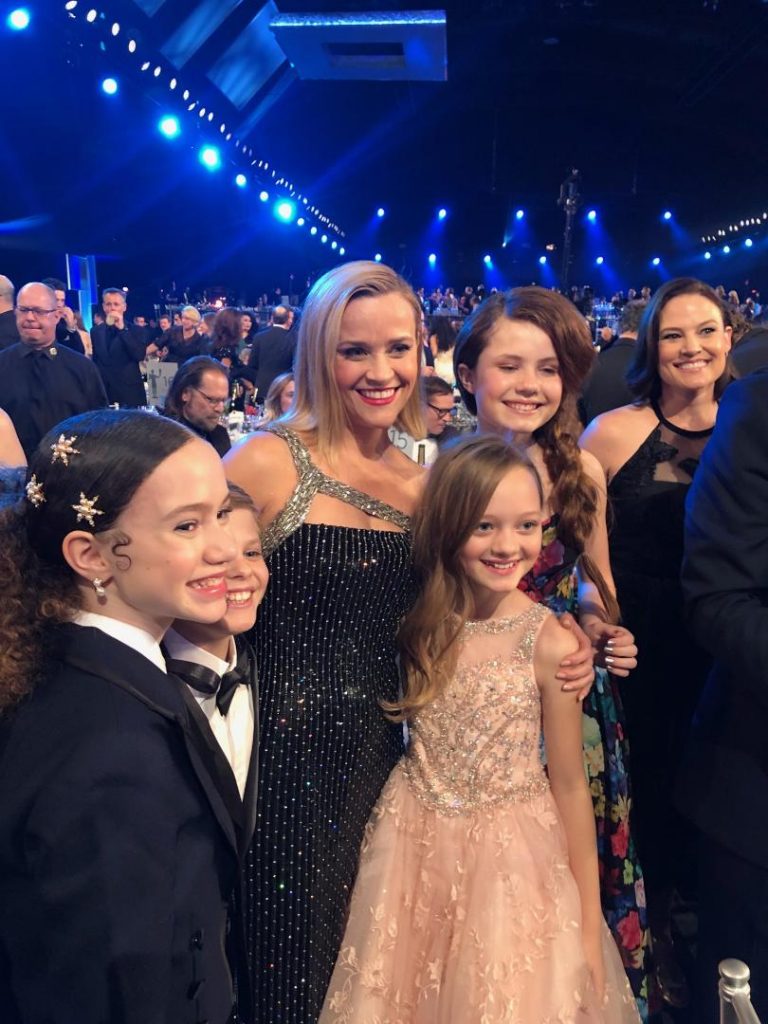 Jacqueline talking to Jamie Foxx who was nominated for outstanding performance by a male actor in a supporting role for the film “Just Mercy”: 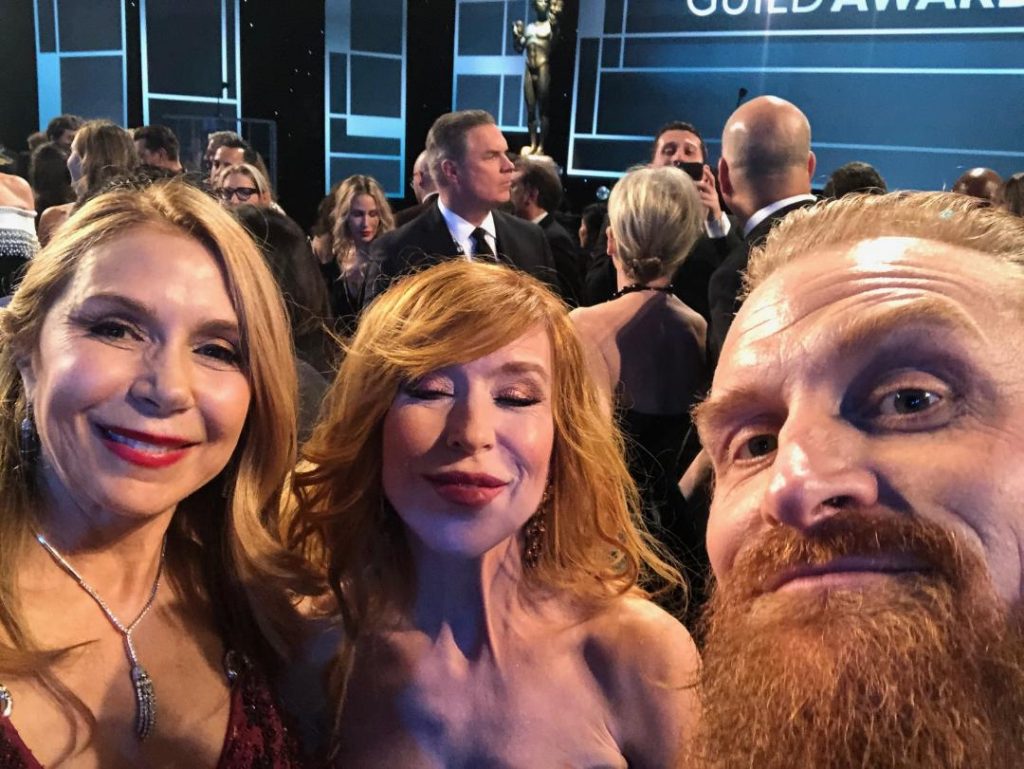 The warm and wonderfully talented Sterling K Brown– was nominated for outstanding performance by male actor in a drama series in “This is Us” and I love this actor! His warmth and personality always touches your heart. When I mentioned to him I had auditioned for a part on “This is Us” his response was: “You will be on the show soon”! How encouraging!
Ted Sarandos (the Chief Content Officer for Netflix) from Netflix had their film “The Irishman” as a nominee at the SAG Awards and he was there to support the cast and his film. Under his leadership the company received 50 Primetime award nominations since 2016!
It was and uplifting night and everyone there was a winner and special. It’s so great to be part of a industry and group of people who create and entertain the world!