Spike TV’s “One Night Only: Alec Baldwin” was taped at Harlem’s World Famous Apollo Theater in New York City. The exclusive black tie evening was a great night of comedic tributes, and  laughs for honoree Alec Baldwin ,with some of the biggest names in entertainment and comedy.  Baldwin’s friends and luminaries that were there to honor him were from the worlds of comedy, film and television, and included : presenters Robert De Niro (The Wizard of Lies), Julianne Moore (Difficult People), Tracy Morgan (Fist Fight), Jane Krakowski (Unbreakable Kimmy Schmidt), Jack McBrayer (The Middle),: photo below Left to Right of : Jack McBrayer, Robert De Niro, Julianne Moore, Jane Krakowski and Tracy Morgan : 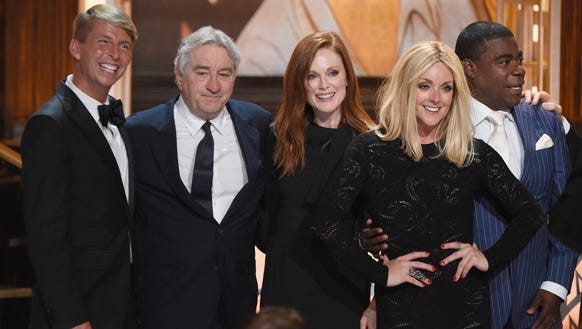