Home Sports 100th Indianapolis 500 : Indianapolis Motor Speedway in Speedway, Indiana
Share on Facebook
Tweet on Twitter
The Indy 500 Championship Race Coverage TV Special , and updated 2017 news story , is by sports & racing reporter, and TV Show Host Richard Marcella who as been covering every Indy 500 Championship for over 25 years ! Richard has worked as a TV show host, news reporter, and camera & film tech person, for over 20 years for Entertainment & Sports Today !
The 101st Indianapolis 500 will take place on Sunday, May 28, 2017 at The Indianapolis Motor Speedway in Speedway, Indiana.  So stay tuned for Richard’s news coverage of this epic race !

The 2016 Indianapolis 500 (branded as the 100th Indianapolis 500 presented by PennGrade Motor Oil for sponsorship reasons) took place on Sunday, May 29, 2016, at the Indianapolis Motor Speedway in Speedway, Indiana. It was the premier event of the 2016 Verizon IndyCar Series season. 24 year-old rookie Alexander Rossi of Andretti Herta Autosport won the race on fuel mileage over Carlos Muñoz and Josef Newgarden. Two-time winner Juan Pablo Montoya entered the race as the defending champion.

The 2016 race marked a milestone as the 100th running of the Indianapolis 500. The race came five years after the event’s Centennial Era, a three-year long commemoration which celebrated the 100th anniversary of the opening of the circuit (1909), and the 100th anniversary of the first Indy 500 (1911). The 2016 running was the ninety-ninth scheduled 500-mile race of the canon, as the 1916 race was scheduled as a 300-mile race.

The month of May activities at the Speedway opened May 14 with the third annual Grand Prix of Indianapolis. Indianapolis 500 practice began on Monday, May 16. Time trials were held on May 21–22, with James Hinchcliffe winning the pole position. Carb Day, the traditional final practice session, and the annual Pit Stop Challenge, was held May 27. 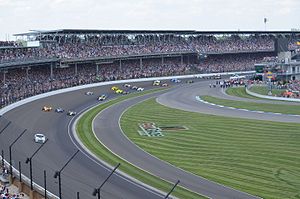 The field in turn one on the pace lap.
Raceday featured partly cloudy skies and temperatures in the low 80 °F (27 °C) range. Hélio Castroneves had a small issue getting his car started, but quickly resumed his place on the grid. During the first parade lap, smoke began to come from underneath the car of Buddy Lazier, stemming from what was later reported to be a stuck throttle. Lazier would not return to the race until roughly a quarter of the way through.

Pole starter James Hinchcliffe led the field into the first turn, but was passed on the backstretch by Ryan Hunter-Reay, who led the first lap of the race. From here, the first quarter of the race became a three way battle for the lead between Hunter-Reay, Hinchcliffe, and Josef Newgarden. The first round of pit stops occurred during this time, which served to spread out the field and separate the leaders from the rest of the pack. They also allowed for Townsend Bell to join in on the battle for the lead. On lap 47, the first caution of the day flew for debris on the backstretch. During the ensuing pit stops, an incident occurred when Will Power pushed Tony Kanaan against the pit lane wall while exiting his own pit stall. Power was penalized for the incident and sent to the rear of the field.

Green flag racing resumed on lap 54 with Ryan Hunter-Reay in the lead. The battle between him and James Hinchcliffe resumed with the two swapping the lead regularly. The battle was interrupted on lap 64 when defending champion Juan Pablo Montoya lost control of his car in turn two and hit the outside wall. This marked the first time that Montoya failed to finish an Indy 500. Pit stops again occurred during this yellow. A second pit lane incident occurred when Simon Pagenaud, who had been running well up in the field, bumped into the car of Mikhail Aleshin while leaving his pit box. Pagenaud, just as his teammate Will Power, was sent to the back of the field for the incident. During the pit stop sequence, Will Power elected to stay out, giving him the lead.

The race was attempted to be resumed on lap 71, but reports of moisture briefly delayed the restart. The race went back green on lap 74, where Will Power was quickly shuffled back by James Hinchcliffe and Ryan Hunter-Reay, who once again resumed their duel for the lead. At roughly lap 90, Hélio Castroneves joined the leading group and inherited the lead for the first time on lap 92. The third caution of the day came out just laps later on lap 94, when Sage Karam went wide while trying to pass Townsend Bell and slapped the wall in turn one. Karam’s car slid against the wall all the way to the backstretch. Pit stops occurred during the yellow with no major incidents. Bryan Clauson stayed out to lead three laps during this yellow before making his own stop, promoting Castroneves back into the lead. Also during this yellow, Simon Pagenaud began to report that the engine in his car had started to misfire, effectively ending his chances of winning the race.

Second Half of Race : 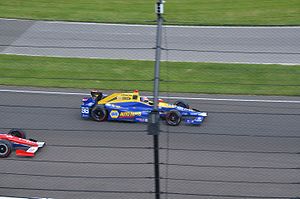 The green flag came out again on lap 104. Hélio Castroneves led for the opening few laps after the restart, but soon fell behind Ryan Hunter-Reay, Townsend Bell, and Tony Kanaan. These three would fight for the lead for the next several laps, swapping positions regularly. On lap 115, the 4th caution period of the race occurred when the rear suspension on the car of Mikhail Aleshin broke, sending him spinning into the turn one wall. Conor Daly was also collected in the incident after spinning in an attempt to avoid Aleshin’s car. Daly retired from the race due to the incident, while Aleshin would eventually return after many laps of repair.

Yellow flag pit stops during this caution period brought one of the most pivotal moments of the race. As cars exited the pits, previous race leader Townsend Bell attempting to gain position contacted with Hélio Castroneves, sending Bell into a spin that collected Ryan Hunter-Reay. Bell and Hunter-Reay would both fall off the lead lap due to the incident, while Castroneves was not greatly affected. During these pit stops, Alex Tagliani and Alexander Rossi elected not to pit, putting them off sequence from the rest of the field.

Racing resumed on lap 121 with Alex Tagliani in the lead. the battle for the lead became a battle between Tagliani and Alexander Rossi for roughly 15 laps, before both drivers had to come in for their own pit stops. This handed the battle for the lead back to Hélio Castroneves and Tony Kanaan. On lap 149, Castroneves and Kanaan appeared to be leading what would be another round of green flag pit stops. However, just as both reached their pit boxes, the fifth caution of the day occurred when a tire from Buddy Lazier‘s car came off the car and onto the race surface in turn two. Lazier would retire from the race due to damage caused from trying to drive with only three wheels. Yellow flag pit stops would once again occur, cycling Castroneves and Kanaan back to the front of the field. Several cars would be sent to the rear of the field during this caution for entering a closed pit lane in order to have emergency fuel service.

Racing resumed on lap 158 with Hélio Castroneves in the lead, but Tony Kanaan took the lead almost immediately. A four-way battle for the lead ensued as Castroneves and Kaanan were joined by Josef Newgarden and James Hinchcliffe. On lap 161, Castroneves’s chances of winning were dashed when J. R. Hildebrand clipped the left rear bumper pod on Castroneves’s car, forcing him to the pit to make repairs. Castroneves caught a small break, though, when the sixth and final caution of the race flew just two laps later after Takuma Sato hit the outside wall at the exit of turn four. Believing all cars would need to stop again, most drivers made yellow flag pit stops.

The green flag flew once again on lap 167. The battle for the lead became a three way duel between Tony Kanaan, Josef Newgarden, and Carlos Muñoz. J. R. Hildebrand also ran in the lead group, but was off sequence in pit stop strategy and came in much earlier than anyone else.

Race winner Alexander Rossi.
With 10 laps to go, it became apparent that the leaders would need a splash of fuel to get the cars to the end of the race. Of the leading group, Tony Kanaan would be the first to pit, followed by Josef Newgarden a few laps later, and finally Carlos Muñoz with five laps to go. It appeared the winner would be the driver with the best pit stop.

When Muñoz made his stop, the lead of the race passed to Alexander Rossi, who had been 10th at the time of the previous restart. With the guidance of Bryan Herta, Rossi attempted to gamble on fuel and finish the race without another pit stop. With two laps to go, Rossi began to slow considerably in order to bring the car to the finish. As the white flag fell, Rossi held a lead of over 20 seconds. Despite running a final lap at less than 180 mph and coasting from turn 4 to the finish line, Rossi was able to hang on to win by roughly 4.5 seconds over his teammate Carlos Muñoz.[22] Rossi was the first rookie to win the Indianapolis 500 since 2001 when Hélio Castroneves took victory in his first attempt. 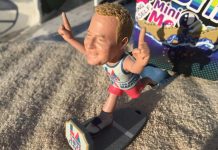