The 2018 Grammy Awards will take place in New York City —  that will be the 60th anniversary of the event, so we expect that the biggest names in all of the music world , along with A – List Celebrities , will be there for this historic and iconic event !

The big Pre- Grammy Concert Dinner Gala will honor Fleetwood Mac as The 2018 MusiCares Person of the Year , at Radio City Music Hall , on Jan. 26 , 2018 – which is only about a mile North from The Garden.

New York Mayor Bill de Blasio said : “We welcome the Grammy Awards back to New York City with open arms and we look forward to continuing to partner with a music industry that supports access and empowerment in the arts.”

Grammy CEO Neil Portnow said : “It’s definitely exciting, and for me a little bit nostalgic as well, because my first Grammy Awards after being hired the previous December was the Madison Square Garden show in 2003. . . . . .   It also will incur greater expenses because the cost of doing this in New York is extraordinarily higher. That’s just the way it is. As a not-for-profit [organization] we are in the business of being efficient.”  Therefore , most people expect the ticket prices will have to be much higher to try and cover all of the greater expenses. Grammy members will be fighting for these tickets , and will pay a pretty penny to obtain them , for this once in-a-lifetime event !

Grammy Producer Ken Ehrlich said : “But there is an excitement to a New York show  . . . . Each one has an energy of its own, and it really does get to you. Some of our really great moments have come during shows we did in New York: Aretha Franklin singing ‘Nessun Dorma,’ the first show we did at Radio City Music Hall when Lou Reed sang ‘Walk on the Wild Side.’ I think we can take advantage of both the venue and what New York represents musically.” 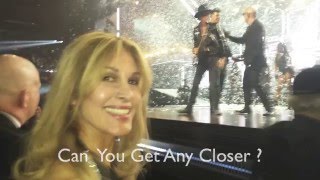 Check out our video to experience going To The Grammy Awards from the 1st. row- center stage seats right down on the floor ! Pre-show at The Microsoft Theatre at LA Live , then walk the red carpet with the biggest stars in the music world , and then enjoy having the best seats in the house to watch the 58th Annual Grammy Awards at The Staples Center. Then walk next door to The LA Convention Center for The Official After-Party – Grammy Celebration . Watch this show for photos with , and video clips of celebrity performances of : Ariana Grande , Tony Bennett , Robin Thicke, Justin Bieber, Adele, Stevie Wonder, Pitbull, Joe Perry of Aerosmith, Taylor Swift, Beyonce, Ed Sheeran, Bruno Mars, Weeknd, Lionel Richie, and many more. This was a great experience and this short video will give you a taste of that !