“The Simpsons” animated comedy TV Series focuses on the eponymous family in the town of Springfield in an unnamed U.S. state. The head of the Simpson family, Homer, is not a typical family man. A nuclear-plant employee, he does his best to lead his family but often finds that they are leading him. The family includes loving, blue-haired matriarch Marge, troublemaking son Bart, overachieving daughter Lisa and baby Maggie. Other Springfield residents include the family’s religious neighbor, Ned Flanders, family physician Dr. Hibbert, Moe the bartender and police chief Clancy Wiggum.

Now “The Simpsons” Hit TV series have had some amazing technology done -that went into the making of a brand new slot machine: The game itself represents the theme amazingly well, WMS released a new cabinet called ‘gamescape’ specifically for this new Vegas game, with no less than 5x  HD 4k LCD screens bringing a level of graphics experience never before seen on the casino floor. A Barco style central screen facing straight at you, and left and right screens at a diagonal facing you, are matched by a giant overhead 40 inch HD monitor to envelop and immerse the player seat in the game experience, whilst the use of a soundbar allows full 3D sound in all four directions without a bulky sound chair and a 10″ tablet replaces the old button controls. Game play occurs in various zones around the TV shows iconic set locations, Homer at the power plant, Apu’s Kwik-E-Mart and Moe’s tavern being the most famous and popular as voted by viewers. All spins take place on the same 5×5 reel set which is filled with Simpsons themed pay symbols which include all the main characters and extra Simpsons essentials such as Duff beer and Homer’s pink sprinkled doughnuts. Wilds can alter with each spin as a random bonus linked symbol, so you can have anything from Itchy and Scratchy to Marge giving you a wild symbol in addition to the main wild which is the show’s logo. The music is of course derived from the show’s famous theme tune and the audio effects and sound bites are all either drawn from previous episode footage or in some cases recorded specifically for the show, just as with the successful Ellen slots a key thing which makes this collaboration work is the fact that the brand has really contributed with content for the game rather than leaving the game designers only stock footage or stills to work with.

Aside from the roaming location footage, cutscenes and character interaction, WMS have offered a number of gameplay focused ideas aimed at ensuring that the slot is as enjoyable to play as the TV series is to watch, by far the biggest of these is the motion sensing player interaction. When in the base game round you are looking for four doughnuts to land to trigger the interactive free spins, one doughnut each on the corner of the 5×5 reel set, if you manage this the doughnut wheel bonus engages, and you now get to play as Homer, attempting to catch four coloured sprinkles as they fall from above the reels. Blue sprinkles will add extra spins to the initial allowance, green sprinkles will add a multiplier, red will add sticky wilds and white will allow linked symbols for every spin. At the end of the sprinkle fall, the doughnut wheel engages and Homer takes a huge bite to allocate your number of spins. 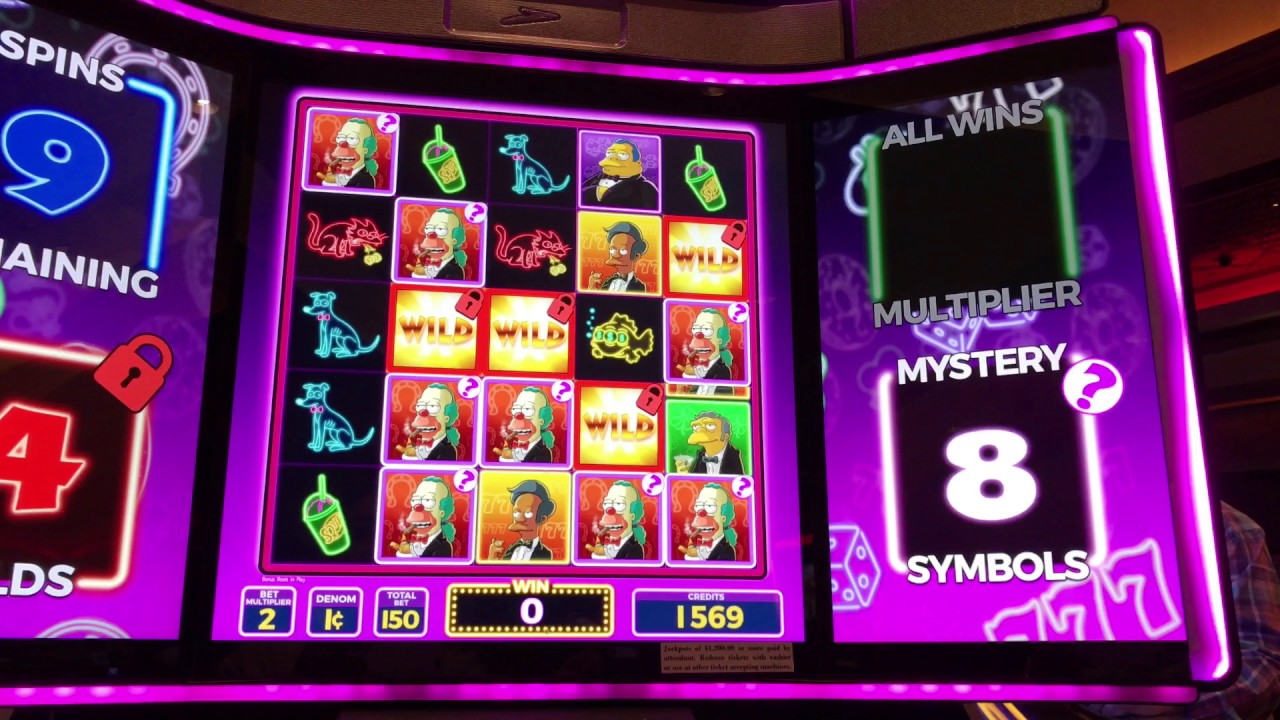 The other bonus round of note takes place at Moe’s tavern, where you get to choose which of the catch phrases Bart will use on his latest prank call for credit prizes. There is also an instant pick win style bonus which can be scratched using the motion sensor, it’s worth noting this isn’t skill based it’s simply an interactive random bonus and you can choose to play without the sensor on autoplay if you wish.

It’s a very fun and Interactive game, with clips from the show, where the characters talk and joke around with you- and make comments on each spin you do on the slot machine. The major characters are voiced over by the original actors from the TV show – so you hear the same voices as you do from the Simpsons Cartoon, so you get many comments directed to you as you play – even funny insults towards you – as if you were in the cartoon itself !

Homer Simpson (Voice of Dan Castellaneta), Herschel Shmoikel Pinchas Yerucham Krustofsky, formerly known as Rory B. Bellows, better known by his stage name Krusty the Clown (also the Voice of Dan Castellaneta !), Moe the Bartender -the owner of Moe’s Tavern -(Voice of award winning actor Hank Azaria) , Apu the owner of the Kwik-E-Mart, (also the Voice of Hank Azaria !), and police chief Clancy Wiggum -(also the Voice of Hank Azaria !!), all face directly at you , and make comments on each spin of the slots, and joke around with you as if you were a character in the Simpsons show. Each of these lead characters all have their own unique bonus rounds with special effects, where you can win bigger amounts of money. In the monorail bonus : Bart Simpson (Voice of ‎Nancy Cartwright) shows up in the monorail with his father Homer Simpson as the conductor.

“The Simpsons” is the longest-running scripted primetime TV series in the US (29 seasons), and the longest running show of any kind in the history of Television!  Many of you have been watching The Simpsons for nearly 30 years, since it started back in 1987 as a series of shorts on the Tracy Ullman show, no one, even the show’s creator could possibly have dreamed that rebel Bart and his dysfunctional suburban American family could be so integral a part of our modern culture some 3 decades later.  With more awards than most shows have episodes and with its own fair share of controversy the show and its characters have become as much a part of mainstream culture as real life celebrities, indeed, many actors vie to get a guest slot on the show, it is almost a must have on the CV of anyone wishing to become a modern day celebrity legend. Homer Simpson is one of the most influential characters in the history of television, and is widely considered to be an American cultural icon. The British newspaper The Sunday Times described him as “the greatest comic creation of [modern] time”. He was named the greatest character “of the last 20 years” in 2010 by Entertainment Weekly, was ranked the second greatest cartoon character by TV Guide, behind Bugs Bunny, and was voted the greatest television character of all time by Channel 4 viewers!  So it was a genius of an idea to make a Slot Machine based on this popular TV show. Most of the times it’s hard to find a seat in the casino to play The Simpsons Slots Machines!

Branded slots are all the rage in recent years and with new technologies waiting to be showcased, industry frontrunners WMS have made a new slot machine for the world’s biggest TV show with what they say is their best ever casino game. They really have gone big for this game too, with a roaming location scene structure reminiscent of IGT’s Avatar slots, a brand new cabinet with a whole host of new features and next generation gaming technologies such as motion sensing player interaction. Don’t worry though slot fans, the traditional free spins, wilds and pick win bonuses are all still going to make an appearance, albeit enhanced and flavoured by audiovisuals from all the great Simpsons cast.

The featured video, and above photo- is off me In Harrah’s Casino Southern California, where I got a big jackpot win on the Simpsons Slot Machine: $500 ! I lined up 25 Homer Simpsons at the highest level ! I Did this at the lowest level a few months ago , but the jackpot wasn’t as big. This is one of the most entertaining and enveloping slots I have ever played, so try it at most casinos near you – Las Vegas, Southern California, Laughlin, Reno, and Lake Tahoe. Let me know if you win ?