Only a few shows left ! Elton’s epic 14 year Residency Ends on The 17th of this month! World-renowned singer, songwriter and performer Elton John gives fans exactly what they’re looking for in his Las Vegas show, “The Million Dollar Piano.” Playing exclusively at The Colosseum inside Caesars Palace, the show’s centerpiece is the namesake piano. This engineering marvel displays more than 68 LED Yamaha video screens. The visuals complement Elton’s performances perfectly. It also weighs more than 3,000 pounds—the weight of an average car. While the piano dominates the stage, the surrounding set design is also a beauty, so expect lots of gold and stunning visual effects, as in the Photo below taken inside The beautiful Colosseum inside Caesars Palace:

So make sure you get the last few remaining tickets left, for an experience of a lifetime ! The final show is on the 17th of this month- so hurry ! & if you have the best seats in the first 3 rows – you can Join Elton up on stage, next to his Million Dollar Piano as he sings: “Saturday Night’s Alright For Fighting”  for a real once in a lifetime experience !  You can see this happen in this featured news video segment , right after Elton performs “Crocodile Rock” . Ticket info below. Photo below of Elton rocking the house during his amazing performance of “Saturday Night’s Alright For Fighting”, with a few lucky fans from the audience up on stage during the song , and the photo below that – of the 4 of us lucky fans that were able to be there in person for one of Elton’s final shows : 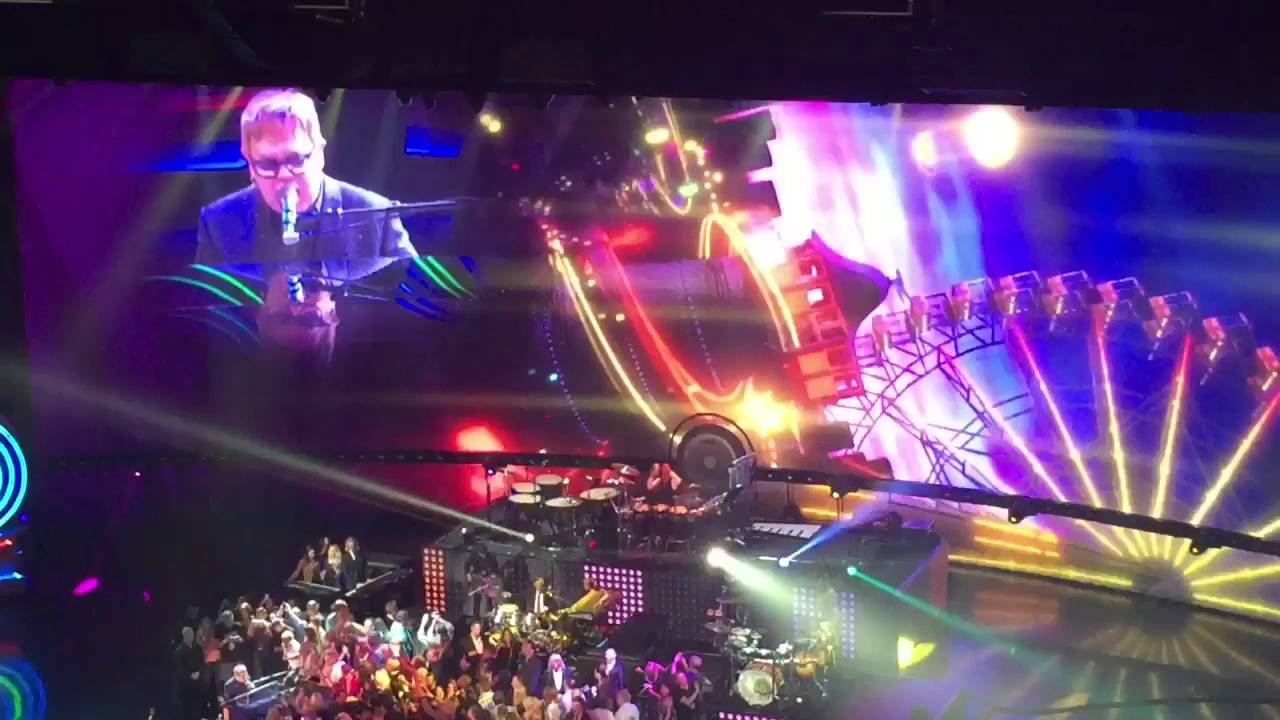 The author of this story , through the help of my casino host was able to get 4 prime tickets for my friends, in the very 1st. row, center, of our section- that gave a great oveview of the whole stage with no heads in our way, a great view looking down as Elton plays the piano, the whole band, and the amazing, beautiful giant HD video screen behind the band! :

One of our viewers wrote in to say : “I was there! May 6, May 8, right in front rows. Now I’m home crying remembering one of the best times of my life! ” Also, one of my friends said that she would be crying the whole time watching Elton John, reminding her of all of his big hit songs throughout the last 40 years ! Well as she told me – she pulled out her tissues and started to cry within the 1st. few minutes, and continued throughout the show- as did many other people that were lucky enough to be there to see this epic – emotional – and heart pounding show by music icon and legend – Elton John !:

Elton John still has a great and powerful voice, and gets audiences on their feet with a set list of the iconic favorites. Beloved songs such as “Rocket Man,” “Benny and the Jets,” “Tiny Dancer” and “Crocodile Rock” make the night especially memorable.

Throughout the past five decades, Elton built one of the most successful and enduring music careers of all time. He is one of the top-selling solo artists, with 25 platinum and 35 gold albums, 29 consecutive Top 40 hits and more than 250 million records sold worldwide. The five-time Grammy and Grammy Legend award winner has been inducted into the Rock & Roll Hall of Fame and has received both Academy and Tony Awards for his contributions in “The Lion King” and “Aida.” Additionally, Elton composed the music for the smash-hit stage production of “Billy Elliot,” which was nominated for a record-tying 15 Tony Awards and won 10, including Best Musical. He brings his glitzy flair and signature style to The Colosseum in his second residency there, after “The Red Piano.”

The Colosseum at Caesars Palace is a theatre located on the Las Vegas Strip in Las Vegas, Nevada. The theatre is the main entertainment venue for Caesars Palace. Deemed the Home of the Greatest Entertainers in the World, the theatre hosts numerous residency shows by Celine Dion, Elton John, Rod Stewart, Cher, Bette Midler, Jennifer Lopez, Shania Twain, and Mariah Carey. Celine Dion has had the longest residency(1,110 shows as of today) at the venue grossing a total of $650 million since her arrival in 2003. The venue has an estimated seating capacity of 4,296 and is inspired by the architecture of ancient Rome along with aspects of contemporary architecture. The cost of the theatre totaled $108 million, becoming the most expensive entertainment venue in Las Vegas, beating the “O” Theatre at the Bellagio Las Vegas.

For the complete story, and ticket info go to: entertainmentandsportstoday.com, on Facebook & Instagram: @entertainmentandsportstoday , and Youtube.com/entertainmenttodaytv  #EJAF @ejaforg   http://apps.facebook.com/causes/5321 www.ejaf.org  @EltonJohn @caesarspalace @caesarsentertainment #LasVegas @lasvegas_lv @lasvegas @Vegas www.caesars.com or call (866) 574-3851 or 1-888-929-7849 The Colosseum at Caesars Palace Elton John live in concert at Caesars Palace in Vegas , and in this music video Elton Sings Crocodile Rock, and has some fans join him up on stage for Saturday Night’s Alright for Fighting ! #EltonJohn live from #LasVegas at #CaesarsPalace #Colosseum in one of his final heart-pounding shows. Try and see @eltonjohn @CaesarsPalace in @vegas before his final show on the 17th of this month.