As we told you about back in March of last year (as in the above cast photo), the big new movie prequel addition to the epic movie series franchise: Star Wars,- the biggest and longest in movie franchise history (In 1978, Star Wars won seven Academy Awards for the original Star Wars Movie in 1977, and later subtitled Episode IV: A New Hope in 1981) : “SOLO: A STAR WARS STORY”, is now in theatres – so see it tonight ! 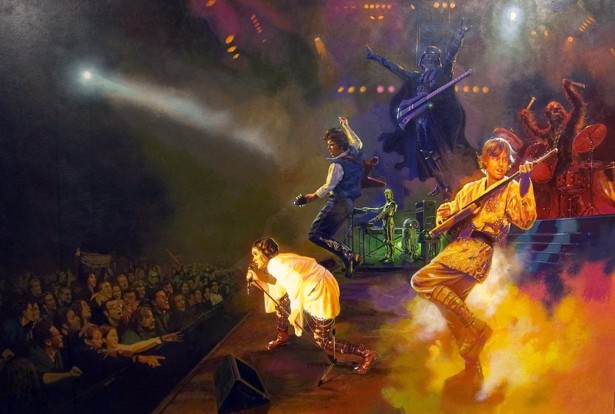 The Star Wars movie series was created by George Lucas, and depicts the adventures of characters “a long time ago in a galaxy far, far away”, and is a worldwide pop culture phenomenon! Star Wars holds a Guinness World Records title for the “Most successful film merchandising franchise”. In 2015, the total value of the Star Wars franchise was estimated at $42 billion, making Star Wars the second-highest-grossing media franchise of all time. This epic movie series franchise include Trilogies:

In the below photo on left is Alden Ehrenreich as the young Han Solo, and on the right is Joonas Suotamo as Chewbacca, in the new “SOLO: A STAR WARS STORY”, that is in theatres tonight:

In our featured news video story called: “Scoundrels”, will be interviews with the main characters, and clips from the new movie that you can see in theatres now, and you will be able to Board the Millennium Falcon and journey to a galaxy far, far away in “Solo: A Star Wars Story,” an all-new adventure with the most beloved scoundrel in the galaxy. Through a series of daring escapades deep within a dark and dangerous criminal underworld, Han Solo befriends his mighty future copilot Chewbacca and meets the notorious gambler Lando Calrissian, in a journey that will set the course of one of the Star Wars saga’s most unlikely heroes. Below photo at a  “Solo: A Star Wars Story,” advance screening with the 3 main lead characters (L-R): Han Solo, Me, Kira, and Lando Calrissian: