Some of the Biggest A-List Talent of Television and More, attended “live & in person” The 2021 EMMY Gift Lounge by GBK Brand Bar & HempHera Luxury Lounge at the LaPeer Hotel in West Hollywood over 2 luxury-filled days. Each guest attending was given a rapid Covid-19 test before entering; in addition, the event organizers carefully scheduled all attendees to ensure compliance with Covid-19 guidelines.

This year’s celebrity guests were given up to 50K worth of the year’s hottest gifts and trips: 4 different vacations, including a 4 night Stay in a Villa at SailRock Resort in Turks and Caicos for Nominees, Dominican Republic, FIJI, and local a Vacay, Diamonds from Yuvika, Custom Pendant from Jonathan Shultz, Luxury Dog clothes from Moshiqa, Skin Care, CBD Products, Custom Dresses, James Peter Henry One-of-a-kind Sweaters, Dinner for 12 at your home, and numerous other surprises. Car service was provided by Motev. This lounge was a great opportunity for clients to mingle with this year’s Emmy nominees, presenters, and other A-List talents.  A tantalizing assortment of food and drinks was served from the moment the celebrities and press walked in the door with the house DJ spinning the best music.

The highlight of the day was when we meet Actress Viola Davis – who is a 2 time Oscar winner, 2 time Tony Award Winner, and Primetime Emmy Award Winner. The New York Times ranked Davis ninth on its list of “The 25 Greatest Actors of the 21st Century” and she is the youngest actor and the first African-American to achieve the “Triple Crown of Acting” ! In the below photo she poses for a photo with our TV show host Margie Rey: 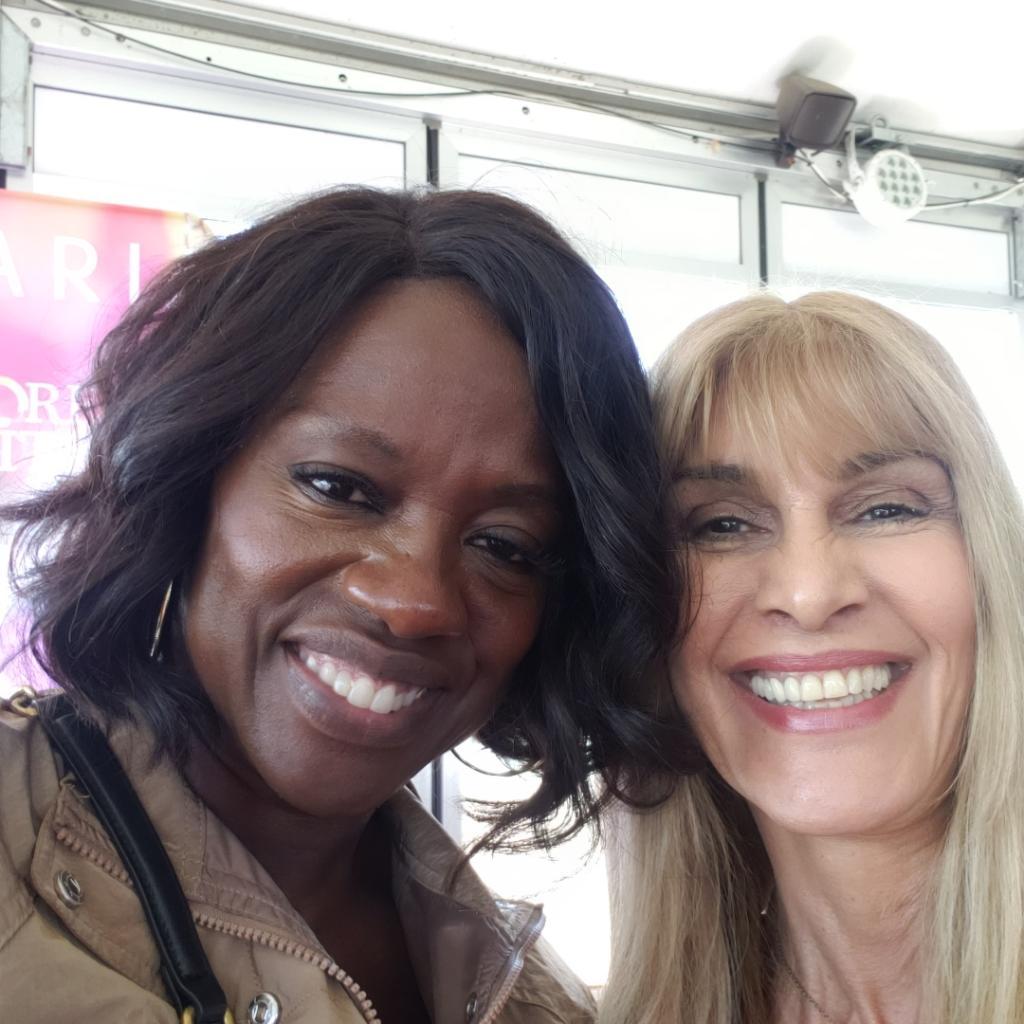 For over 700 years, “l’aygue ardente” has distinguished itself as one of the world’s most noble eaux-de-vie. Best known under the name Armagnac, this brandy rapidly became identified for having 40 virtues due to research conducted in 1310 by Maître Vital du Four. As Cardinal du Four, he was recognized as a great intellect, accomplished theologian, man of science, whom published a celebrated book about his remarkable discoveries, “To keep your health and stay on top form.” The original texts have been preciously guarded in The Vatican library in Rome since the 14th century.
This work bestowed an exceptional destiny for the Armagnac region of France. Cardinal du Four Armagnac, 21 Rébellion is a harmonious blend of choice vintages aged in 400-liter French oak casks from the forests of Monlezun and Limousin. The youngest and more vibrant eau-de-vie has been aged for a minimum of 21 years with the oldest Armagnac in the blend dating back from 1976 vintage – 43 years old. Produced from the highest quality grapes of Ugni Blanc, Baco, Folle Blanche and Colombard that are harvested in the Bas-Armagnac and Ténarèze terroirs, these fine eaux-de-vie are distilled from a traditional continuous copper still called the “Alambic Armagnacais.” With this honorary creation, we pay tribute to the Cardinal as we continue to ensure that the immortal spirit of Armagnac flourishes. Tasting Experience: Soft and brilliant amber brown color. Floral aromas of jasmine and iris followed by gingerbread spices like nutmeg and cinnamon intertwined with dried fig, caramelized apples and toasted wood vanilla flavors. Long lingering finish with notes of cacao beans and salted caramel. Cardinal du Four Armagnac, 21 Rébellion combines complexity and power with elegance …
In this show you can watch the interview by our TV Show Host: Margie Rey at the Emmy Gift Lounge booth for the Cardinal du Four Armagnac, with the founder of this amazing high-end Brandy.

In the photo on the left: Davis holds up a glass of the top of the line “Cardinal Du Four Armagnac” liquor – one of the best quality liquor you will ever try, and it is the Paris 2019 winner of the Gold Medal!  The brand is called: Cardinal du Four Armagnac, 21 Rébellion, which is a Harmonious blend of vintage Armagnacs from 21 to 43 years of age. Cardinal du Four Armagnac pairing experience with Petrossian Caviar. CardinalDuFour.com

Below photo is of TV Producer Steve Taylor talking over dinner with Actor Saul Rubinek, who you would recognize from his many Movie and TV Roles. Saul is a German Born Actor, Director, Producer, and Playwright. Saul starred in movies: Against All Odds, Wall Street, The Bonfire of the Vanities, Unforgiven, Nixon, True Romance, The Express, Barney’s Version, and The Ballad of Buster Scruggs; and hit TV shows like: Warehouse 13, Frasier, A Nero Wolfe Mystery, and as Louis B. Mayer on The Last Tycoon!

Margie Rey the TV show host for Entertainment Today with The Emmy winner for Best Actress in a Drama Series – Viola Davis, at The Governors Ball for The 67th Emmy Awards: 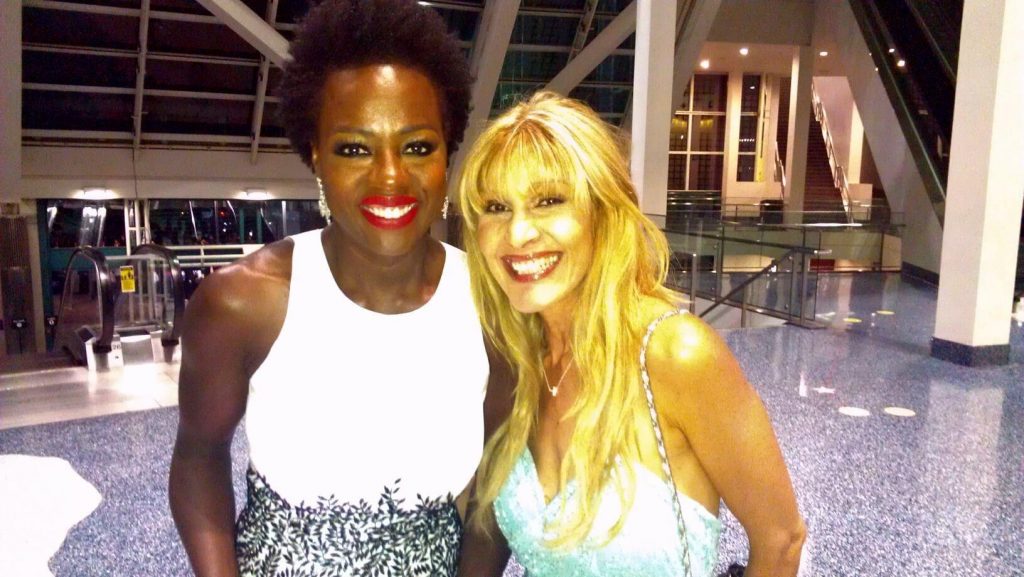 Viola Davis shows me her Emmy that she won for Best Actress in a Drama Series , during the Governors Ball , right after the 67th Emmy Awards in Los Angeles: 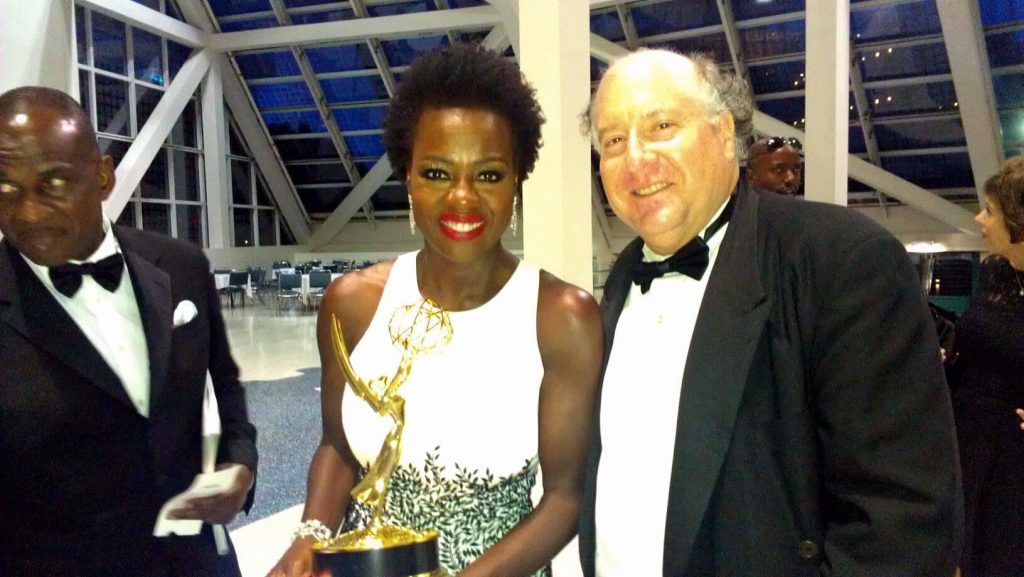 Below are some of the new and hot products of 2021: