You will really enjoy this and get some laughs as all of these stars read their parts from their own homes – so they can social distance due to the Coronavirus. The read consists of an hour of scenes from the iconic 1982 comedy, featuring special messages from original director Amy Heckerling and writer Cameron Crowe and a loaded cast that includes Cook, Penn, Jennifer Aniston, Morgan Freeman, Henry Golding, Jimmy Kimmel, Shia LaBeouf, John Legend, Ray Liotta, Matthew McConaughey, Brad Pitt and Julia Roberts.
Many people consider this the biggest all-star summer movie event of 2020, that is technically from 1982. Comedian Dane Cook is presented  “Feelin’ A-Live,” a fundraiser/virtual live table read of Fast Times at Ridgemont High, the iconic teen pic directed by Amy Heckerling and written by Cameron Crowe.

The movie was authentic and raw when it came to teen comedies and is hailed as a pop culture touchstone — and the teen comedy celebrates its 38th anniversary today. The virtual live table read will be unrehearsed, which means it should be a glorious, anything-goes event with an all-star roster, but Spicoli himself- Sean Penn -won’t be playing the stoner surfer.  Heckerling and Crowe will made a special introduction at the top of the event. 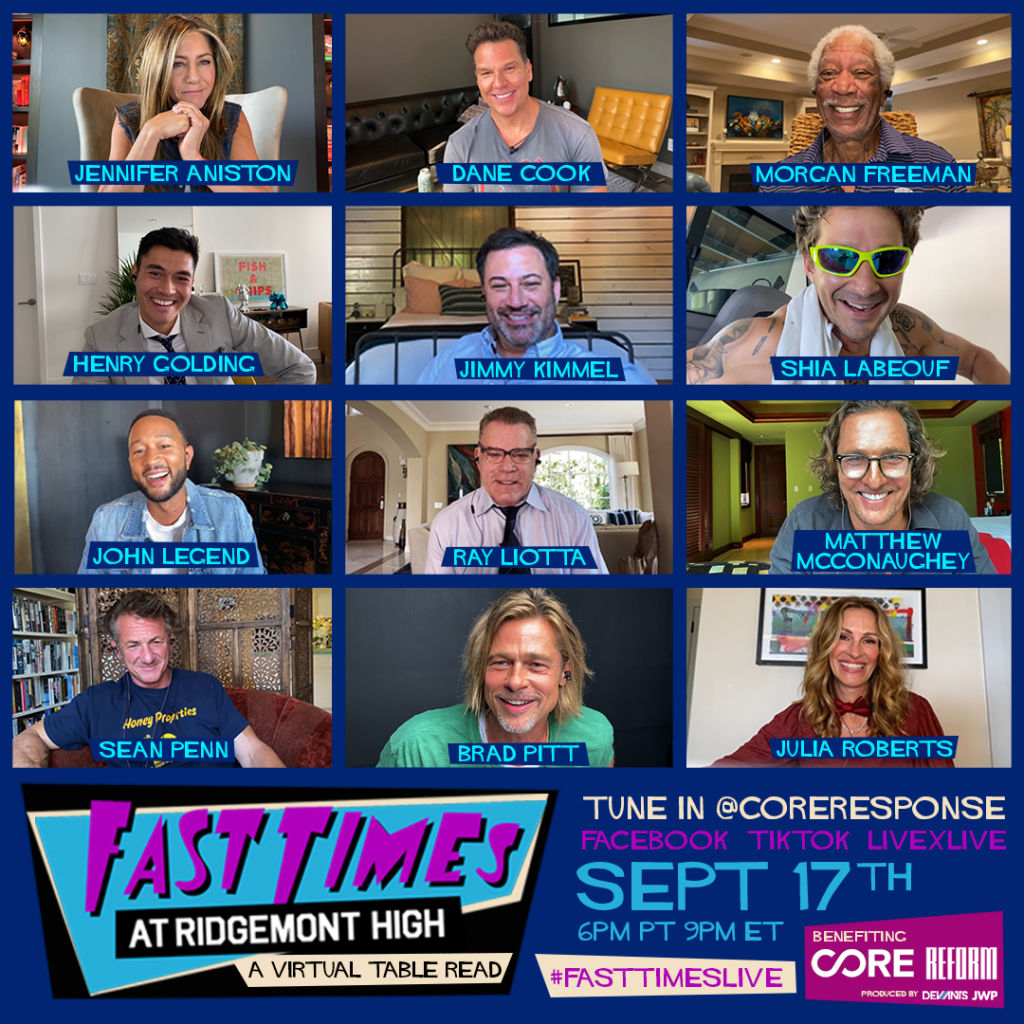 The event will benefit the emergency relief nonprofit CORE, the humanitarian organization co-founded by Penn and CEO Ann Lee, currently on the front lines of the fight against COVID-19 providing testing and relief services in the United States. It also will support the REFORM Alliance, which is focused on passing laws to reform the criminal justice system and protecting the incarcerated population from the spread of COVID-19. The livestreams will feature a donate button, and all proceeds will benefit CORE as well as REFORM Alliance.

“I’m honored that so many talented, wonderful people are willing to get together to celebrate our movie, and to create their own special version of it,” said Heckerling. “And I’m a huge fan of Sean. He has such a big heart, and I fully support CORE and all of his causes.”

Crowe added: “Sean brought magic to us on day one, and he is still bringing that magic to the world. We are so excited to be a part of this 2020 take on Fast Times at Ridgemont High. Thank you to this cast, and to Sean, for always honoring the best things in life, love and creativity. It is, as a great man once said, totally awesome.”

Said Penn: “On behalf of our dedicated team at CORE, I’m so appreciative of the support Dane has given and continues to give to our work. I’m always game for a giggle. So, to gather remotely for a night of laughs with so many talented folks while providing CORE with much-needed resources to continue our vital work, then consider us fully onboard to play!”

Surprisingly Penn won’t be playing Spicolo, but he said that he is “very confident in the new guy.”

Executive produced by Cook and Ivan Dudynsky, the virtual table read of Fast Times at Ridgemont High is presented in association with Deviants Media Inc. and JWP.

Entertainmentandsportstoday.com
Ridgemont High is back in session! Here is #FastTimesLive, a virtual table read of the classic 1982 hit Fast Times at Ridgemont High. The all-star cast includes Jennifer Aniston, Dane Cook, Morgan Freeman, Jimmy Kimmel, Shia LaBeouf, John Legend, Ray Liotta, CORE co-founder Sean Penn, Brad Pitt and Julia Roberts.
This event benefits CORE’s COVID-19 relief efforts to protect vulnerable communities as well as our friends at Reform Alliance. Thank you to our sponsors at SnackPop – they are matching donations up to $25,000! To donate, text CORE to 707070. For more information on CORE’s work, head to https://www.coreresponse.org/. Check out Reform Alliance at https://reformalliance.com/. To purchase a Spicoli 2020 shirt, go to https://www.bonfire.com/fasttimeslive/.