Home Business & Technology It’s a Wrap at The American Film Market – A Big Success...
Share on Facebook
Tweet on Twitter
I attended The American Film Market this year and WOW! What an amazing experience. Impressed with all the awesome workshops covering all aspects of filmmaking. I learned and absorbed so much information not to mention all the contacts I met in the industry.  I went to workshops covering all aspects of filmmaking.  From funding sales and distribution to creative areas such as writing and pitching.  It was so worthwhile to attend it helped me get up to speed on this fast turning merry-go-round of the film/tv world.
Things are changing quickly in the Film and TV business and discussions were had about all the various platforms you can stream or view on these days, and the number of outlets is truly astounding.  But it’s a real opportunity for filmmakers as content is in demand.
AFM affords you the opportunity to meet industry contacts, pitch your project and also go to many parties where you can network. Face to face meetings are so important in the business. BUT having a project that has content & form, knowing how to tell a story and having it be a good one is what can ace your having your project made. You have to have something that resonates, lands on them and is a good story. I attended the pitching conference with Cassien Elwes producer of Elevated, Effie Brown-Project Greenlight on HBO and Tobin Armbrust President of Worldwide Production and Acquisitions of Virgin Produced. I’ve watched some of the movies Tobin has put on the TV screens on the plane, when I fly on Virgin Air and am thrilled there are so many venues and opportunities for filmmakers.
It was exciting to see my fellow filmmakers getting up on the stage in front of these pro’s “pitching” their project in front of a room of at least 300 people. Best part: Getting feedback on how to hone your pitch. They passed a jar around so filmmakers like myself in the audience, might have a chance of being lucky enough to have their name pulled out of it. I put my card in, joining the lottery- hoping I’d get a shot at pitching my short award winning film “The Admired”. I quickly rehearsed in my head my pitch, should I get chosen! I also use my 20 minute short as a “proof of concept” to pitch and as you’ll see many producers/actors are looking at that format to see if they are interested in making a film.
A perfect example of “proof of concept” idea was the conference on “Casting for a Greenlight” with Producers Bradley Gallo: Chief Creative Officer (CCO) of Amasia Entertainment: 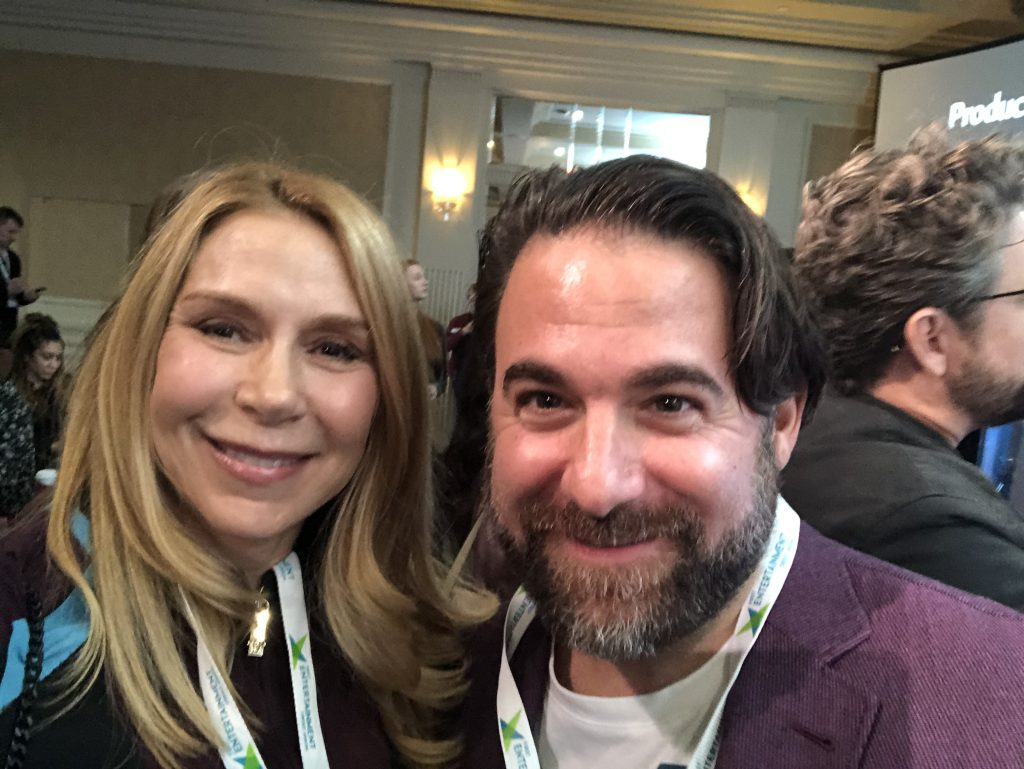 and Christopher Lemole Co-producer of Armory Films. Both Bradley and Christopher spoke about how in addition to scripts, etc. They are viewing short films as “proof of concept” to see if it’s viable and a good vehicle to produce the film. Christopher spoke of receiving a 7 min short film for his currently released film ‘The Peanut Butter Falcon” starring Shia Lebouef and Zack Gottsagen-a young man with Down syndrome who stars in the film. He decided to make it and so did Shia sign on after seeing the “proof of concept” short film, making it easier to get the finances to make it.
As an actor filmmaker, I also enjoyed hearing what top notch Casting Directors like Jessica Kelly of Chrystie Street Casting (in our feature photo with our reporter Jacqueline Murphy) and Heidi Levitt had to say about attaching and looking for talent in a film. Jessica has had me into her casting office many times to audition and I have to say she is amazing and so helpful to actors. Like any good casting director she knows the talent that’s out there and remembers them. When she saw me she immediately said: “Hi Jackie”. I know how many people she sees, so frankly I was impressed.
I went to the Upfront panel on Networks and Platforms. Loved seeing two women in charge of programming. Tia Maggini who is VP of Programming for Lifetime Original movies and Lauren Kisilevsky VP of Original Movies on the Disney Channel. I enjoyed their talking about what is going on in the networks they work at and what they look for.  Like Jonathan Wolf from AFM said: Don’t blindly cast your net, find out what companies do and focus if it’s a fit for your film. Afterwards I had the opportunity to meet both Tia and Lauren and found them to be so helpful and supportive.
I felt so lucky to have all these amazing experiences.  AMF is filled with tips and advice about marketing smaller budget films, the same advice can also be applied to many other fields.  Plus how often to you get to meet these talented, seasoned pro’s!
The Writers Workshop was also amazing. Veteran writers Pilar Alessandra & Steve Wolfson spoke about the essential elements of writing a script. I have actually taken Pilar’s weekend workshop and it was invaluable. AFM makes you aware of all the terrific resources out there.
Yet, another event I enjoyed was: Film Finance Conference: Jeffrey Greenstein of Millennium Media and his partner- manager Alan Seigel, who’s client is Gerald Butler. They talked about making blockbuster chain of franchised films around stars like Gerald Butler in them.  An example is the film “Angel Has Fallen”.
An event also noteworthy: AFM’s Production without Borders Panel & VIP Reception with Larry Namer founder of  E! -A visionary who started E!  – – -> 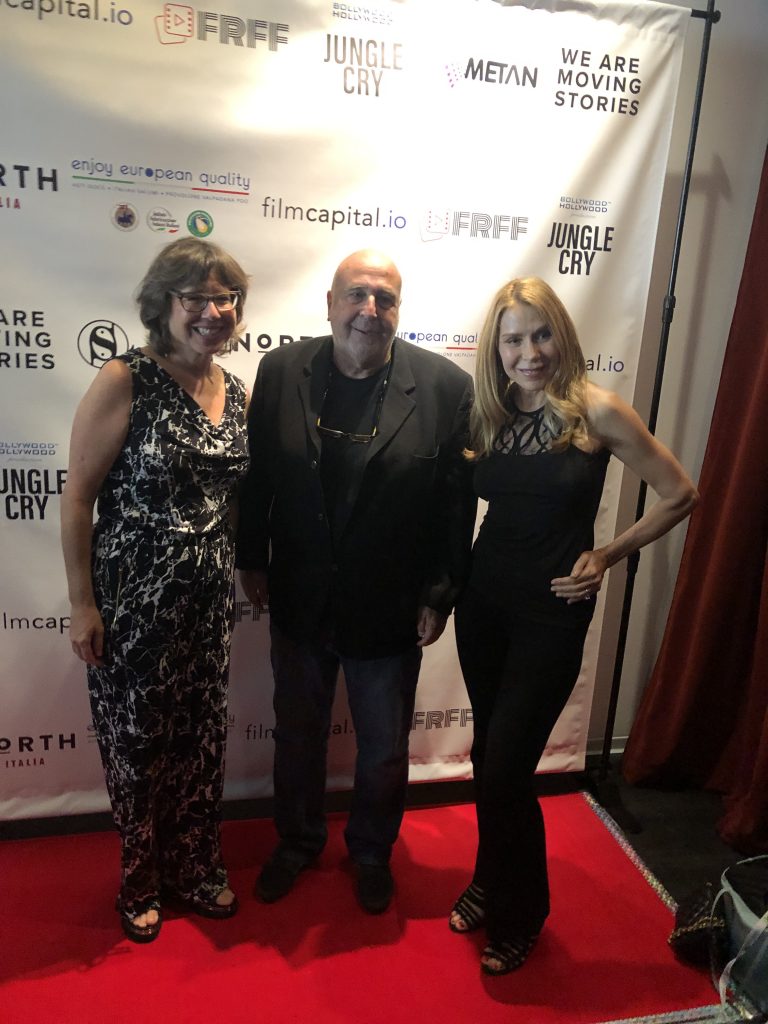 He is now working in China on many projects including his new film called Empress. To a packed room he shared his journey as a producer, the differences “culturally” of working in China and how things have changed since he started. Later on we celebrated his birthday at the reception with a cake and song.
Overall, I recommend AFM to anyone interested in any kind of filmmaking, directing, cinematography, film distributing or producing.  The information and contacts there can really change your career and life.  They also have some great parties, too.  Like the longline of my short film “The Admired” how far would you go to achieve your dream-Well one of the steps I would say is get to the AFM and see what it’s all about.
For more information about AFM, visit americanfilmmarket.com. Jacqueline Murphy www.jacquelinemurphy.net www.theadmired.com  Jacqueline Murphy Writer/Reporter Entertainment Today Entertainment & Sports Today  TIME WARNER / Spectrum. http://entertainmentandsportstoday.com/