The 2022 ESPYS at the Dolby Theatre in Hollywood, had the top Superstar Athletes from the entire world of sports, come out in full force, with the top Celebrities there as presenters! This Gala Award Show was Hosted by NBA World Champion & 3 Point Superstar: Stephen Curry, and Celebrated the Biggest Achievements, Performances and Moments of the Year in Sports! This event was attended by Dwayne “The Rock” Johnson, Dikembe Mutombo, Jon Hamm, Terrell Owens, Shohei Ohtani, Lil Wayne, Katie Ledecky, Russell Wilson & Ciara, and the NBA World Champion Golden State Warriors with: Draymond Green, Stephen Curry, and Klay Thompson, that were among the Night’s Big Winners! 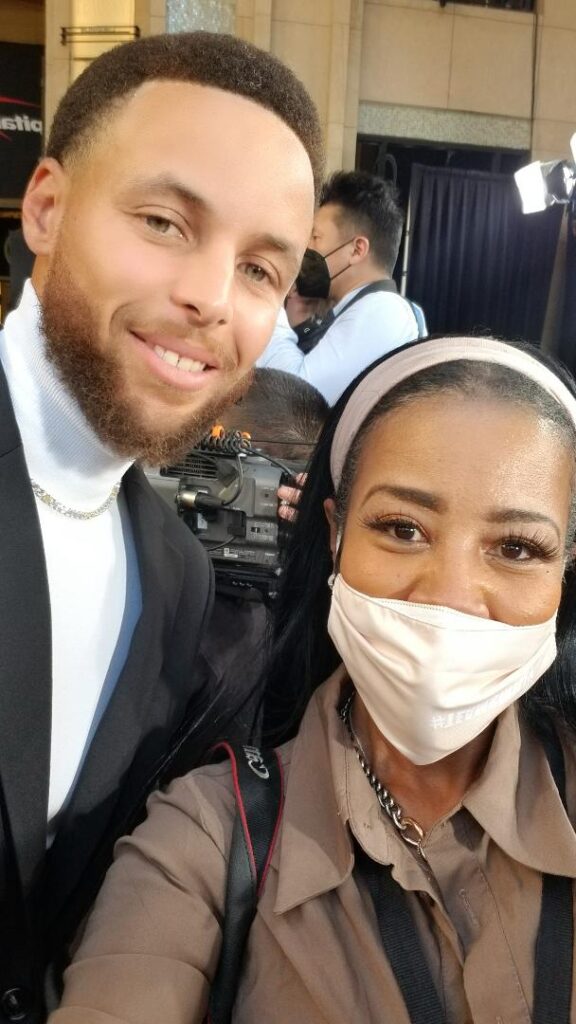 Earlier today, the biggest stars in sports and entertainment convened at The Dolby Theatre in Los Angeles to celebrate the year’s best moments in sports at The 2022 ESPYS Presented by Capital One. Airing live on ABC, the show was hosted by recent NBA Champion: after beating the Boston Celtics in 6 games, and Finals MVP: Stephen Curry, who won the ESPY Award for Best Record-Breaking Performance, for most 3-pointers made in NBA history. Curry opened the show with playful jokes towards his NBA contemporaries before reflecting on his offseason, noting that hosting tonight was welcome after hosting his children’s birthday parties. Famed impressionist Jay Pharoah then joined the 4-time champ on stage for a musical number, celebrating that the sharpshooter has “finally made it” by hosting the ESPYS. 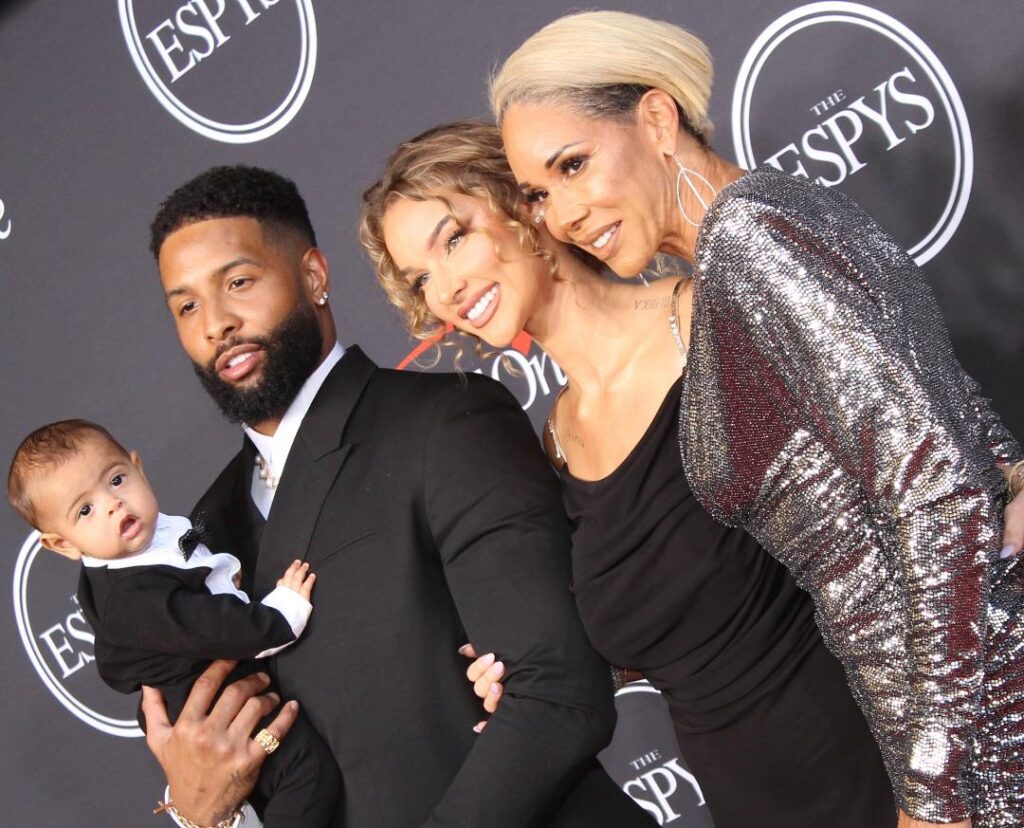 Each year, The ESPYS recognizes individuals in the sports world who have demonstrated admirable perseverance, courage and strength in the face of adversity with three marquee awards: the Jimmy V Award for Perseverance, the Arthur Ashe Award for Courage and the Pat Tillman Award for Service. 2 Superstars that we had meet before when we sat next to them at this year’s Super Bowl Sports Illustrated Party in Century Park: Grammy Award winning singer/songwriter Ciara and Denver Broncos’ quarterback Russell Wilson: 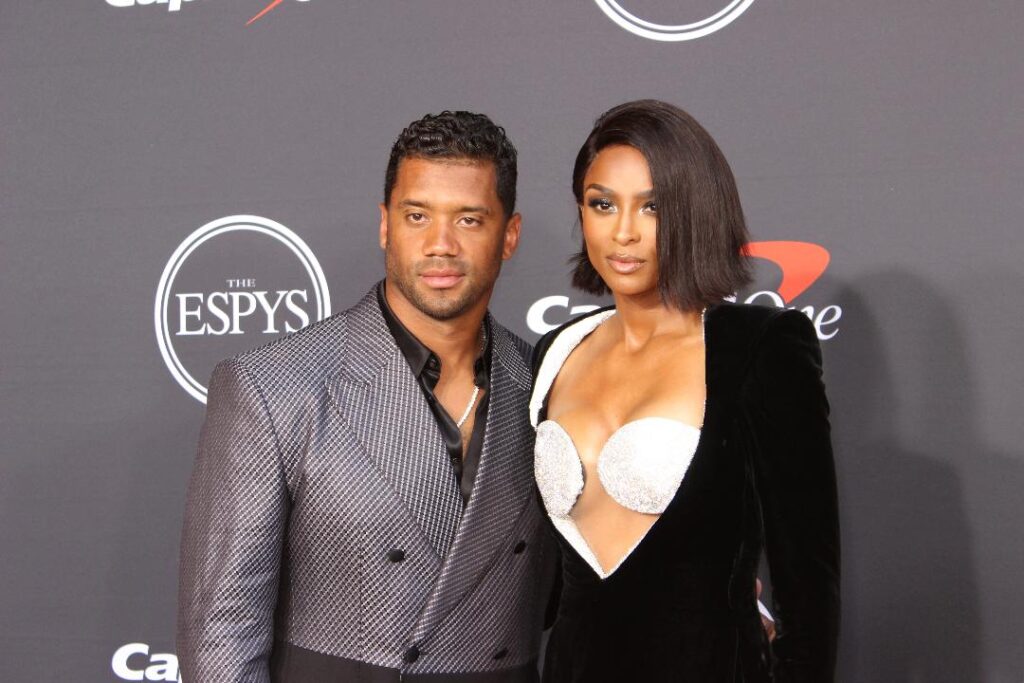 Later in the evening, Black Adam star and XFL Owner Dwayne “The Rock” Johnson accepted the Arthur Ashe Award for Courage on behalf of Vitali Klitschko, who could not be in attendance. The former heavyweight boxing champion and current Mayor of Kyiv was recognized for being an inspiration to people around the globe as one of the faces of the Ukrainian resilience to the Russian invasion. Top Gun: Maverick’s Jon Hamm and ESPN’s Chris Berman presented the Jimmy V Award for Perseverance to legendary broadcaster and Hall of Famer Dick Vitale, who battled melanoma and lymphoma before a March 2022 scan declared he was cancer free. Invoking the memory of his great friend Jimmy V, Vitale encouraged those in the theater and watching at home to continue contributing to the fight against cancer. Vitale has raised millions of dollars for pediatric cancer research and the V Foundation over the years. He left the crowd with a reminder to continue pursuing their dreams and that perseverance plus passion plus pride equals win. 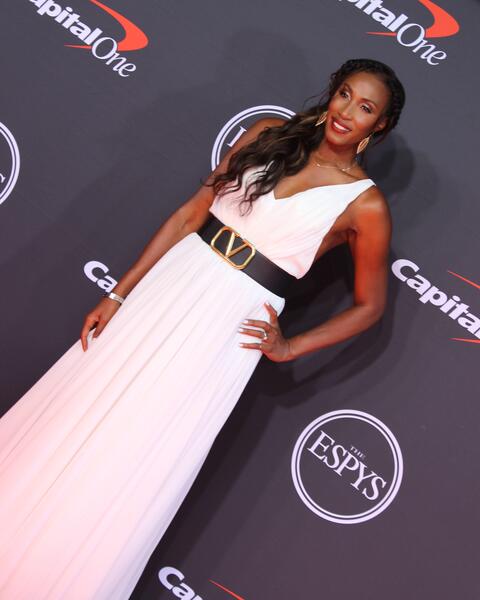 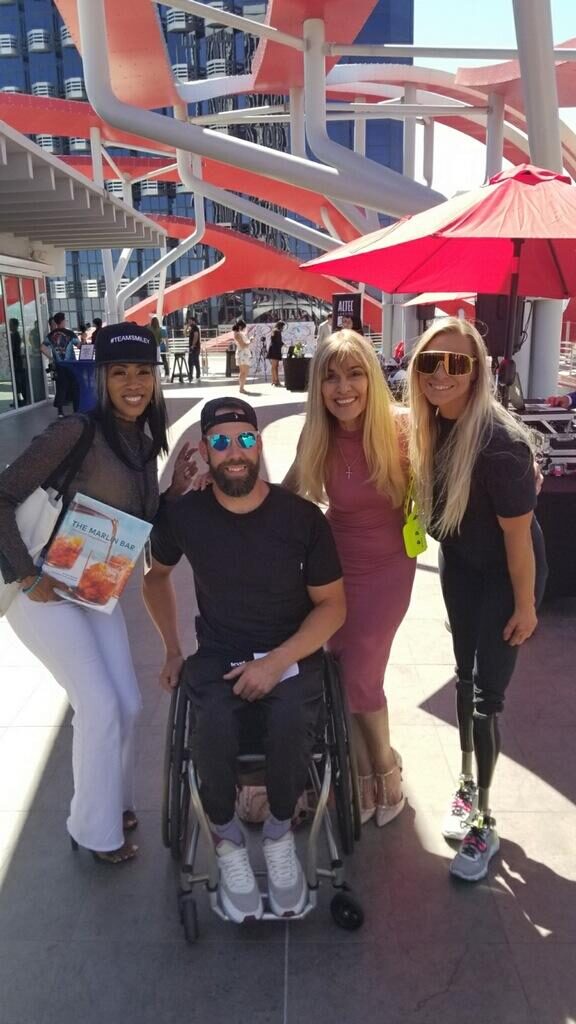 And in the above photo: ESPYS Nominee U.S. Paralympic Team | 17x Paralympic Medalist Oksana Masters (on the extreme right of the below photo- the Blonde woman with Sunglasses, with our reporters: Tressa & Margie): Oksana Masters  (above photo); Aly Raisman, and Megan Rapinoe who spoke to the ongoing fight for rights, recognition and equality women still face today. The moment was accompanied by a performance from Country Music star Mickey Guyton.

The final award of the evening for Best Team was presented by The Woman King’s John Boyega and Grammy Award winning recording artist Lil Wayne: 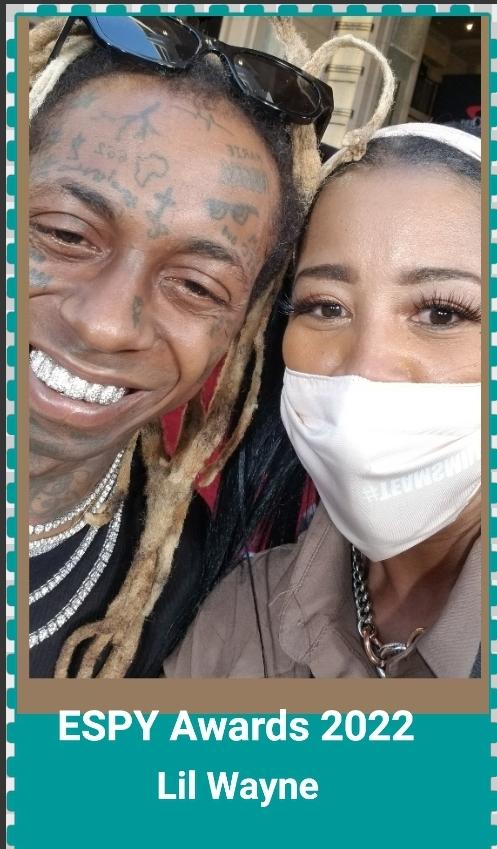 Terrell Owens, nicknamed T.O., is a wide receiver, who was inducted into the Pro Football Hall of Fame in 2018. Terrell walked the red carpet at the ESPY Awards at the Dolby Theatre in Hollywood, as you can see from this photo taken by our reporter Tressa Smiley. Our TV show host & Reporter: Margie Rey had interviewed Terrell before at the Super Bowl when it was in Houston, Texas: 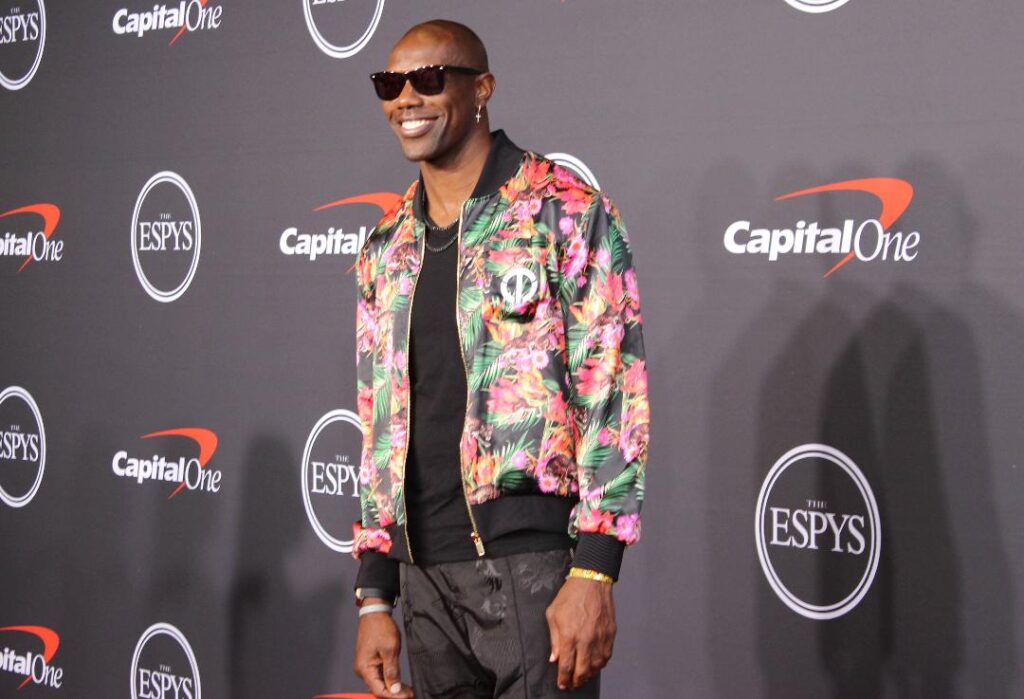 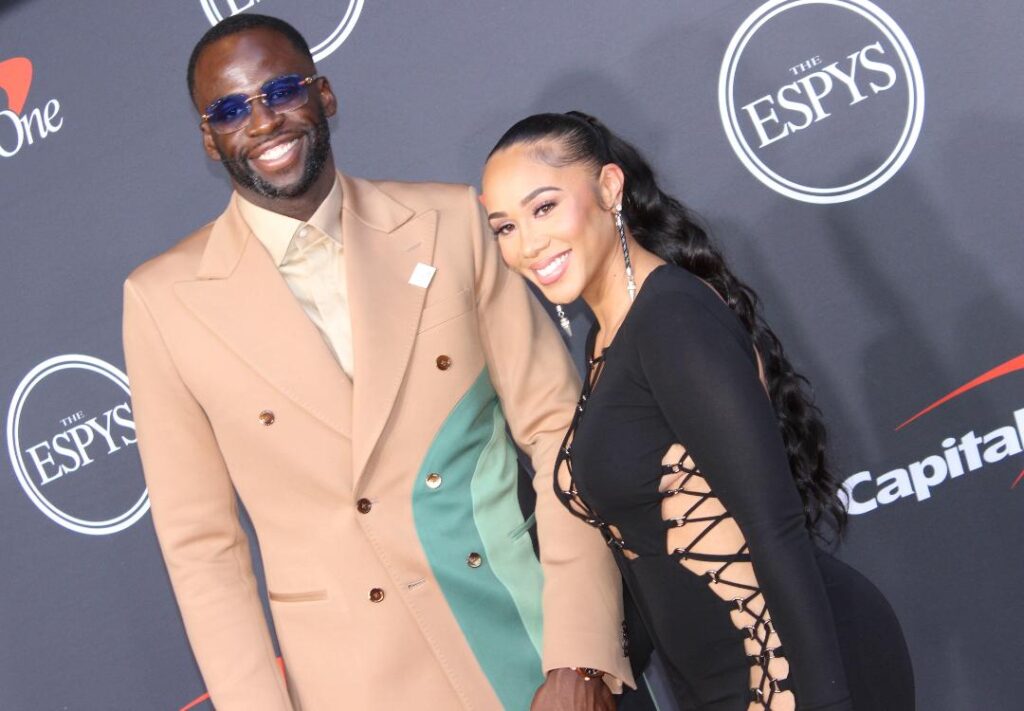 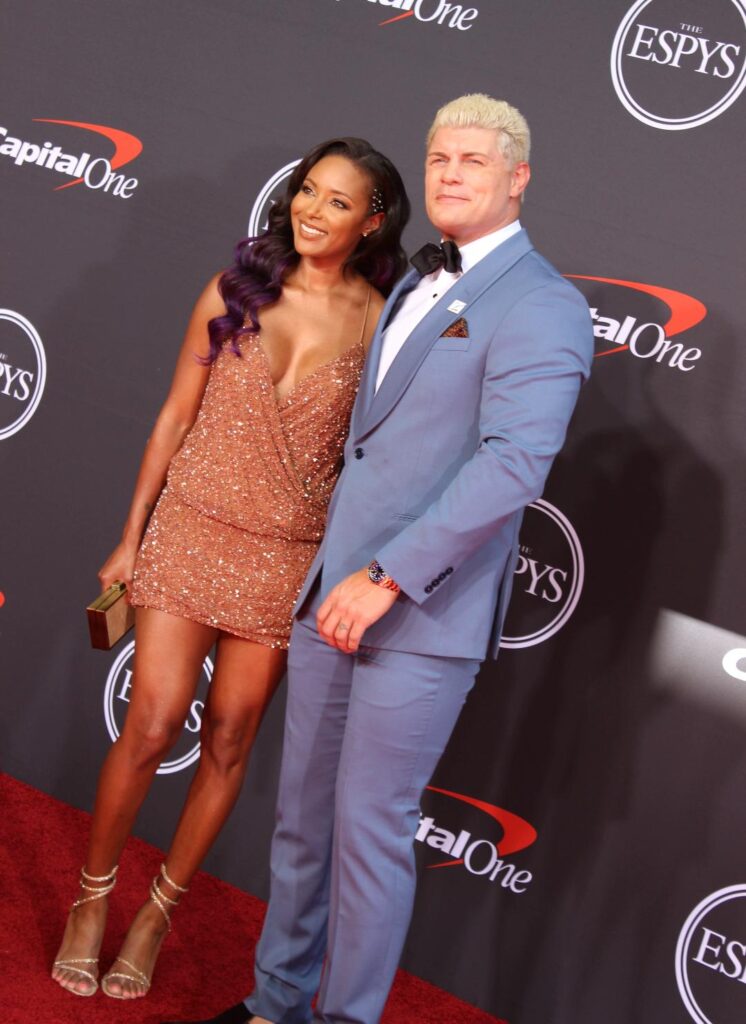 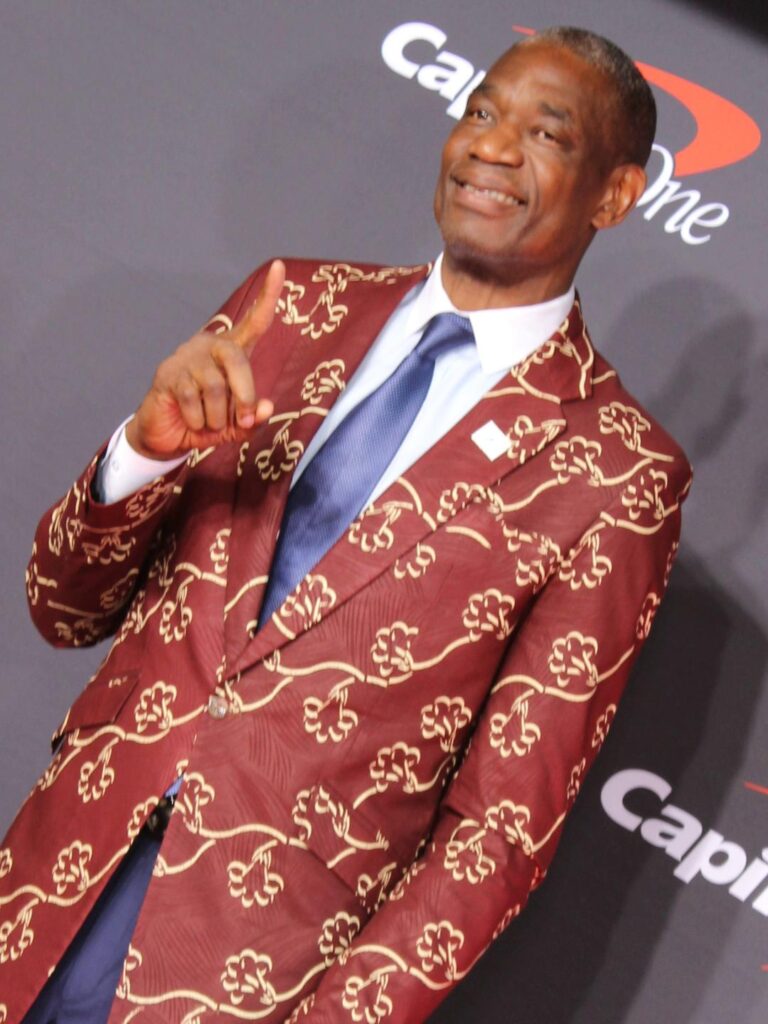 Our Entertainment & Sports Today’s news reporter: Tressa Smiley took all of the amazing photos at this major awards show. Therefore: a very special thanks to our reporter Tressa Smiley for providing this story of the ESPY Awards for our show. There will be more news segments from Tressa, and you can also see Tressa on “VIP Live with Tressa Smiley” , which is a positive talk show platform that connect people, purpose, passion and content fueled by empowerment and praise for all seeking life advancement using the power of positivity. So join this empowerment movement – Make America SMILE, Visit www.tressasmiley.com using the power of positivity. “If you see someone without a SMILE let them borrow yours”